The gloomy outlook comes after the Bank of Korea (BOK) said the local economy grew 0.4 percent from three months earlier in the third quarter, marking a sharp slowdown from a revised 1 percent on-quarter expansion in the previous quarter.

On an on-year basis, the local economy grew 2 percent in the second quarter and again in the third quarter.

In July, the BOK predicted Asia's fourth-largest economy to grow 2.2 percent this year. The latest growth estimate was the second downward revision from the 2.6 percent projected at the start of the year and the 2.5 percent in April.

The central bank is scheduled to offer its final growth outlook for the year in November.

BOK Gov. Lee Ju-yeol has already hinted at a further downgrade, telling the parliamentary finance committee that it may "not be easy" to meet the current 2.2 percent growth target.

Whether the country's economic growth will still meet the 2 percent threshold is a question yet to be answered.

The Q3 growth estimate strongly indicated the possibility of the growth rate slipping to the 1 percent range. 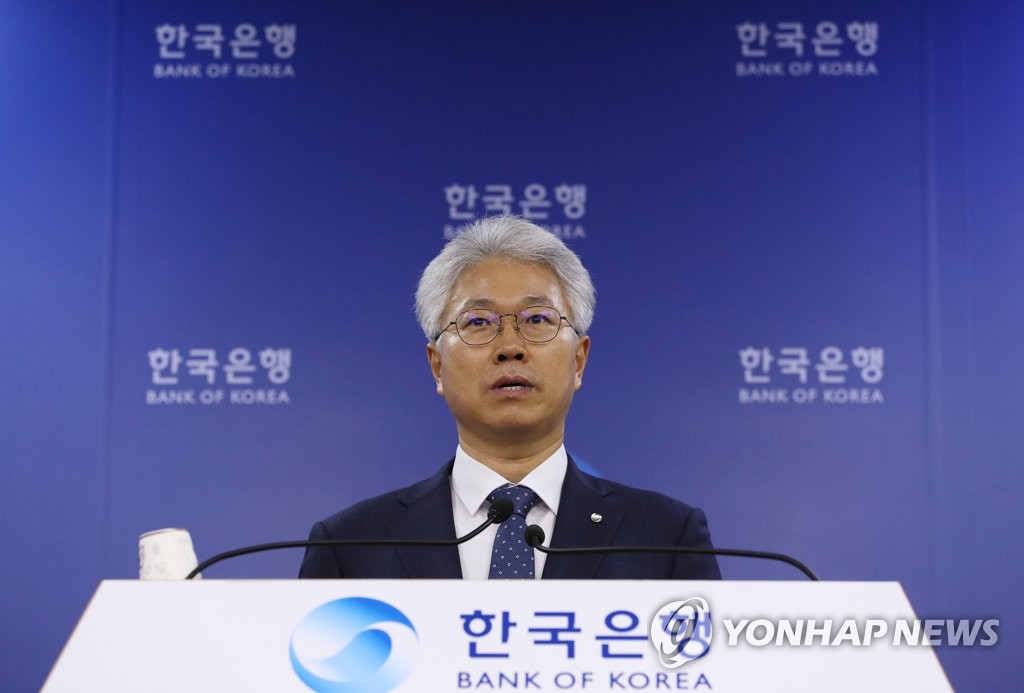 "Annual growth of more than 2 percent will be possible only if the economy grows by 1 percent (on-quarter) in the fourth quarter, or 0.97 percent to be more precise," Park Yang-su, head of the BOK's economic statistics department, told a press briefing.

"I am not in a position to comment on the possibility of 2 percent annual growth, but there still remain uncertainties regarding the U.S.-China trade dispute, along with other geopolitical risks, such as the South Korea-Japan trade spat and the crisis in Hong Kong," he told the briefing.

The BOK chief repeated his gloomy outlook for the local economy Thursday but insisted whether the country's growth rate will fall below the 2 percent mark is still not determined.

"A 2 percent growth this year may not be easy as of now, but it is still not determined as there are many factors in the fourth quarter, such as a government plan to enhance its fiscal measures," he said while speaking before the parliamentary finance committee in an interpellation session.

"The government will do its utmost in the fourth quarter by mobilizing all available resources to achieve an annual growth of over 2 percent," he said, adding, "It is important to make sure that government spending is executed properly."

The country's consumer prices fell 0.4 percent from a year earlier in September, marking its first-ever drop in inflation.

The BOK official noted a recovery in exports and local spending will be the key to growth in the fourth quarter.

"Whether private consumption can be further expanded and if the government will maximize its budget sending as planned will determine fourth-quarter growth," he said. 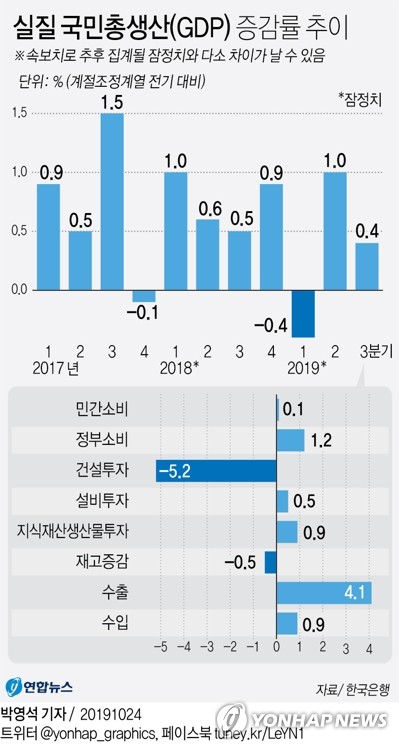 Local analysts apparently saw little hope for increased sending by neither consumers nor the government.

"The two most noticeable characteristics of the third-quarter performance are that private consumption and construction investment were slow and that government spending supported growth," said An Young-jin, an economist at SK Securities.

"There need to be special measures for the South Korean economy to keep its 2019 annual growth rate at over 2 percent," An added.

Lee Young-hwa, an analyst at Kyobo Securities, noted the government simply may not have enough money left to continue defending the country's economic growth in the fourth quarter.

"I believe it will be difficult for the government to boost its spending in the remaining 2 months of the year since its budget spending rate had already reached 77.4 percent of the total as of end-August," the analyst said.