On Wednesday, the Spanish king started a two-day visit to South Korea at the invitation of President Moon Jae-in.

During a ceremony at Seoul City Hall to mark the granting of the honorary citizenship, Park said South Koreans should know about the European country taking the lead in finance, construction, infrastructure and startups. He also relayed the king's hope that the two countries will enhance their bilateral relations.

In response, the Spanish monarch said Spain and South Korea share the objective of improving people's livelihoods through new technologies including big data and the Internet of Things, vowing to further Seoul-Madrid relations on the occasion of the 70th anniversary of establishing diplomatic ties between the two countries.

On Wednesday, Moon and King Felipe held talks and agreed to strengthen cooperation between the two countries in tourism and overseas construction markets.

King Felipe became the first Spanish king to visit South Korea since a trip by his father, Juan Carlos I, in October 1996. He ascended the throne in 2014 upon the abdication of his father. Letizia married then Crown Prince Felipe in May 2004 after serving as a news anchor at Spain's state-owned public-service television broadcaster, TVE. 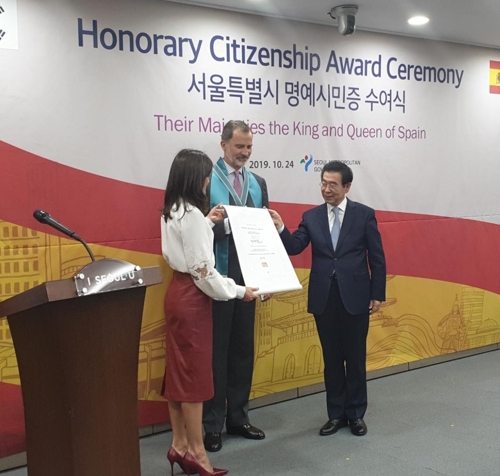