SEOUL, Oct. 24 (Yonhap) -- After months of an unsettling row over trade and history, South Korea and Japan appear inclined to step up the spadework to mend their strained ties, with Thursday's high-level talks highlighting their shared message against further escalation.

Prime Minister Lee Nak-yon and Japanese Premier Shinzo Abe held a highly symbolic meeting in Tokyo, amid rising calls from within their countries and without to find a diplomatic off-ramp and repeated appeals by their mutual ally, the United States, to seek a truce. 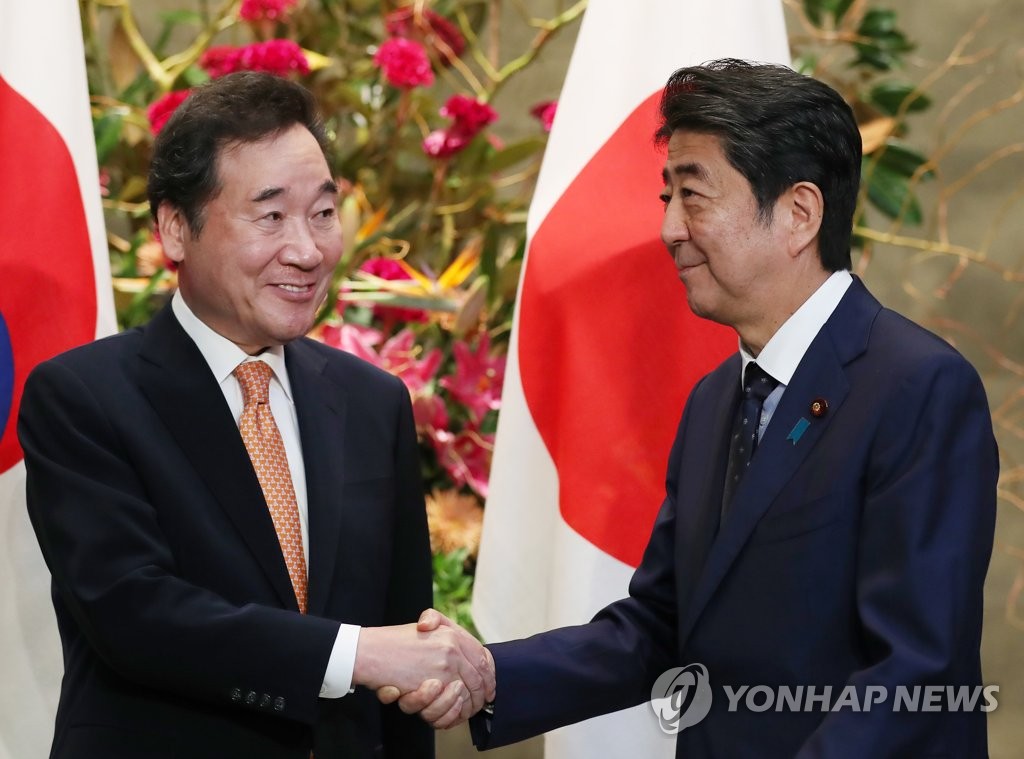 The bilateral ties were put on a slippery slope after Japan slapped export curbs on South Korea in July and removed Seoul from its "whitelist" of favored trade partners in August -- steps seen as political retaliation for last year's Korean Supreme Court rulings against Japanese firms over wartime forced labor.

South Korean Vice Foreign Minister Cho Sei-young, who accompanied Lee in Tokyo, cast the meeting with Abe as a "turning point" in the efforts to restore bilateral relations.

"The two prime ministers shared the understanding that both South Korea and Japan, as crucial neighbors, cannot leave the difficult situation of the bilateral relationship just as it stands," Cho told reporters after the meeting.

Cho added that Lee and Abe also shared the view that cooperation between South Korea and Japan, and trilateral collaboration with the United States, are crucial in handling the North Korean security quandary.

Analysts said that efforts to restore bilateral relations are expected to gain traction if South Korean President Moon Jae-in and Abe hold a summit on the margins of multilateral gatherings in the coming months.

Moon and Abe could both attend the summit with the Association of Southeast Asian Nations in Thailand and the summit of the Asia-Pacific Economic Cooperation in Chile -- both next month -- and their trilateral summit with Chinese President Xi Jinping in China in December.

At the center of attention is whether the two countries could reach a deal that will lead Seoul to retract its decision to withdraw from the General Security of Military Information Agreement (GSOMIA), a military information-sharing pact seen as a rare case of bilateral defense cooperation.

Observers are raising hopes that the two countries could quickly chart a path out of their current spat, hopefully through a summit before Nov. 23, when GSOMIA is set to expire unless Seoul cancels its decision to terminate it.

Seoul has been demanding that Tokyo first remove its new export restrictions before it withdraws its decision for the GSOMIA termination.

During a press briefing, Seoul's Foreign Minister Kang Kyung-wha said that the GSOMIA is not yet part of the agenda for in-depth consultations between the two countries, while reiterating a call for Japan to remove export curbs.

"Our stance is that when Japan withdraws export restriction measures, we can restore trust and forge the friendly mood, and then we have an intention to reconsider the (GSOMIA) issue," the minister said.

Kang also pointed out that Seoul and Tokyo have become able to understand each other more through diplomatic talks, although the "gaps" remain big.

The biggest gap appears to be different perspectives over the issue of Japan's wartime forced labor.

Last year, the top court here ordered Japanese firms to compensate South Korean victims of forced labor during Japan's 1910-45 colonization of the peninsula. The order is based on the court's recognition of victims' individual rights to claim damages.

Yet, Tokyo argues that all reparation issues stemming from the colonial rule were settled under a 1965 state-to-state treaty aimed at normalizing bilateral relations. Based on that, Abe has claimed that Seoul should keep a "state-to-state" promise.

Seoul has made a proposal that South Korean and Japanese firms jointly form a fund to compensate victims, but Tokyo rejected it based on its position that any deal should not do any harm to Japanese firms.

Despite such gaps, there have been growing calls for the two countries to move past the historical dispute.

North Korea's continued launches in recent months of short-range projectiles that put South Korea and Japan within range have highlighted the need for stronger security cooperation between Seoul and Tokyo, at least in the early detection of Pyongyang's saber-rattling.

Washington's repeated pleas for its allies to patch things up have also encouraged them to start exploring an exit from their rancorous row and the benefits from their cooperation for regional peace and stability.

In his personal letter that Prime Minister Lee delivered to Abe, Moon emphasized that South Korea and Japan are "crucial partners" that need to cooperate for peace and stability in Northeast Asia.