During the talks, Kang Kyung-wha and her Spanish counterpart, Josep Borrell, noted that the two countries' relations have deepened in various areas, including politics, economy and culture, since they established diplomatic ties in 1950.

Kang used the talks to call for support from Spain and the European Union for Seoul's efforts to lay the groundwork for a lasting peace on the divided Korean Peninsula. Borrell evaluated the efforts highly, the ministry said.

Borrell came to Seoul this week to accompany King Felipe VI, the first Spanish king to visit South Korea since a trip by his predecessor, Juan Carlos I, in October 1996. 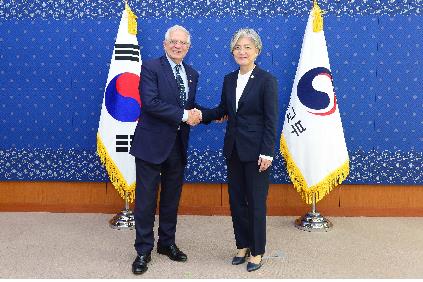