SEOUL, Oct. 25 (Yonhap) -- The government announced a set of education reform plans Friday, including the abolition of all elite high schools nationwide in 2025, after President Moon Jae-in called for a "drastic" improvement in the country's college admission system as part of his campaign to promote social fairness.

It will also overhaul the controversial admission policies of local universities in the direction of expanding so-called regular selection, which is based primarily on the results of the annual College Scholastic Ability Test (CSAT).

Promoting fairness has emerged as a key task for the latter half of Moon's five-year presidency in the aftermath of the Cho Kuk incident.

A catalyst for the "fairer society" initiative was fierce public criticism of Moon's pick of Cho, one of his closest aides, as justice minister. Cho's family has faced intense prosecution probes into apparent perks and alleged irregularities, including over his daughter's schooling, prompting a series of massive streets protests against Cho in Seoul. Supporters of Moon staged separate candlelight vigils demanding prosecution reform.

Cho's daughter is accused of having benefited from various types of privileges stemming from the social stature of her parents, both professors, in gaining admission at Korea University in Seoul and post-grad medical school at Pusan National University in the southern port city of Busan. 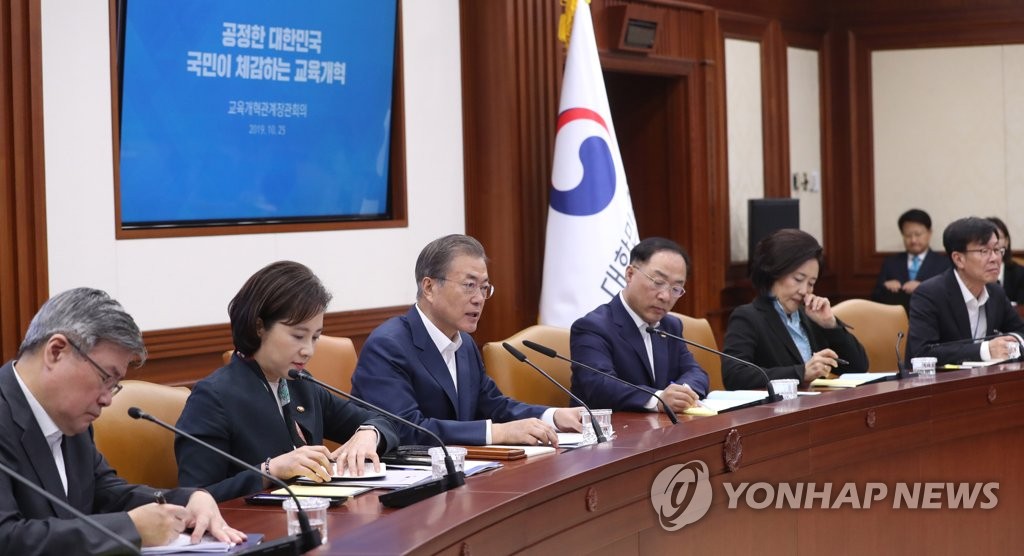 The Cho case, Moon said, has demonstrated the South Korean people's desire for a higher level of fairness and reform.

"Our education is now facing a crisis of trust," Moon said as he presided over an education policy meeting with related ministers at the government office complex in Gwanghwamun, central Seoul.

Especially at issue are elite high schools, which include "autonomous private" and foreign language ones as well as other "special purpose" schools. Unlike the "pure" goal of offering tailored education to talented students, many agree, those high schools have become a mere bridge or channel to enter coveted colleges. Even elementary and junior high school students often take after-school tutoring at "hakwons," or commercial teaching institutions, for the elite high schools.

After the session, Education Minister Yoo Eun-hae said the government will transform all of the high schools to "general" ones in 2025.

"(The government) also plans to adjust the proportion of the regular selection, centering on the CSAT, for universities in Seoul," which grants more "irregular" admissions through the combined assessment of applicants' academic performance and alternative admission criteria based on things like costly extra-curricular activities and out-of-class volunteer work, according to Yoo. 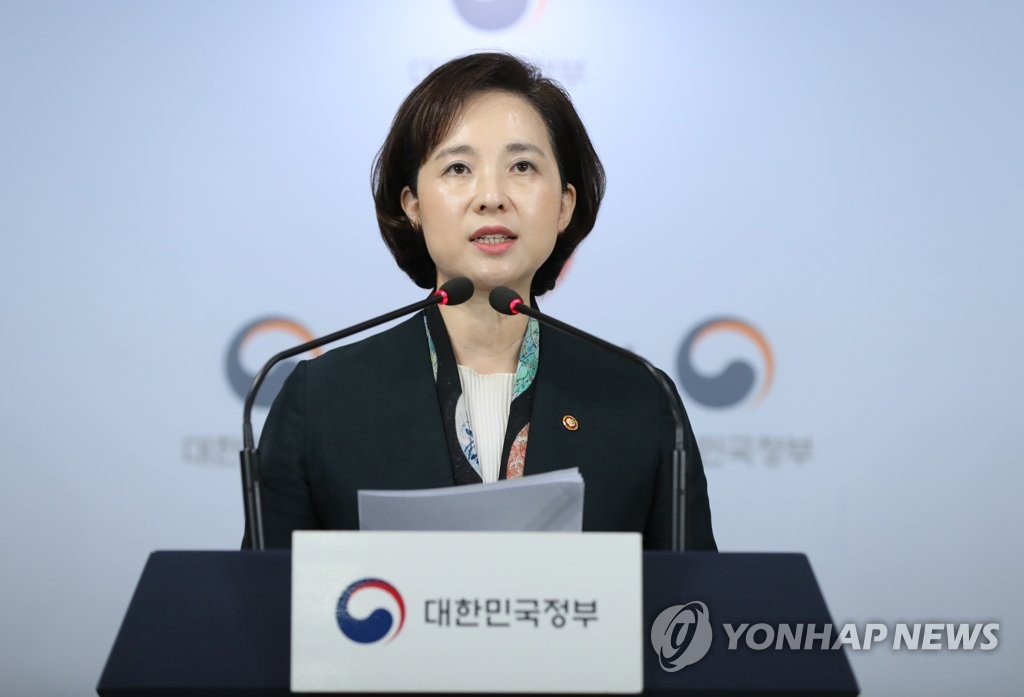 The specific ratio and time to introduce the measure will be announced later, added Yoo, who doubles as deputy prime minister for social affairs.

At the outset of the Gwanghwamun meeting, Moon also pointed out widespread public distrust in the current system.

It's not desirable to expand the comprehensive screening of academic and non-academic records for "irregular" college admissions before appropriate measures are taken to minimize adverse effects, he said.

Addressing the National Assembly earlier this week, Moon vowed to make efforts in earnest to level the playing field in education.

"What is most heartbreaking to the people is unfairness in education," he said in the budget speech.

A few weeks ahead of the halfway point in his tenure, Moon has effectively kicked off a full-fledged education reform drive, but it's uncertain whether it will be successful.

"It's really a difficult issue," he admitted. In fact, social consensus has long been elusive with regard to an optimal college admission system.