SEOUL, Oct. 25 (Yonhap) -- The Doosan Bears are now a win away from their sixth South Korean baseball championship.

The Bears defeated the Kiwoom Heroes 5-0 in Game 3 of the Korean Series at Gocheok Sky Dome in Seoul on Friday, winning their third straight game in the best-of-seven Korea Baseball Organization (KBO) championship series.

Starter Seth Frankoff held the Heroes to two singles through six shutout innings, and his batterymate Park Sei-hyok went 2-for-2 with two RBIs from the No. 9 spot.

The Bears can finish off the Heroes on Saturday, back at the dome, for their sixth Korean Series title and their first since 2016. The first pitch is 2 p.m.

No team has rallied from a 3-0 Korean Series deficit to win the championship in KBO history. 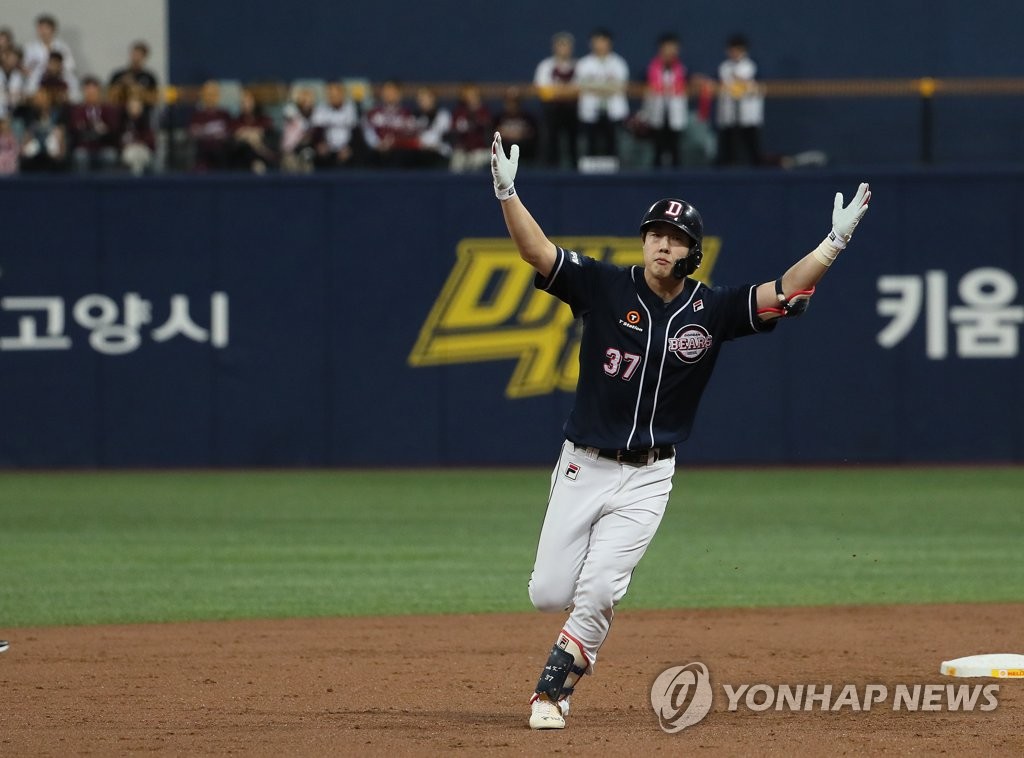 The Bears opened the scoring for the first time in the series, putting up a four-spot in the top of the third inning.

Kim Jae-ho was hit by a pitch from Kiwoom starter Jake Brigham to begin the inning, and No. 9 hitter Park Sei-hyok brought him home with a sharp triple down the right field line.

Leadoff Park Kun-woo then jumped on the first pitch he saw and deposited it over the left field wall for a two-run blast, putting the Bears ahead 3-0. It was Park's first career Korean Series home run.

Two batters later, Kim Jae-hwan lined a two-out single to center, and Oh Jae-il drove him from first with a double to left-center gap for a 4-0 advantage.

Brigham was yanked after that disastrous third inning.

Brigham's counterpart, Frankoff, no-hit the Heroes through three innings, but he ran into trouble in the fourth.

With two outs, Frankoff gave up his first hit of the game to Lee Jung-hoo, and then walked the next two batters to load the bases. 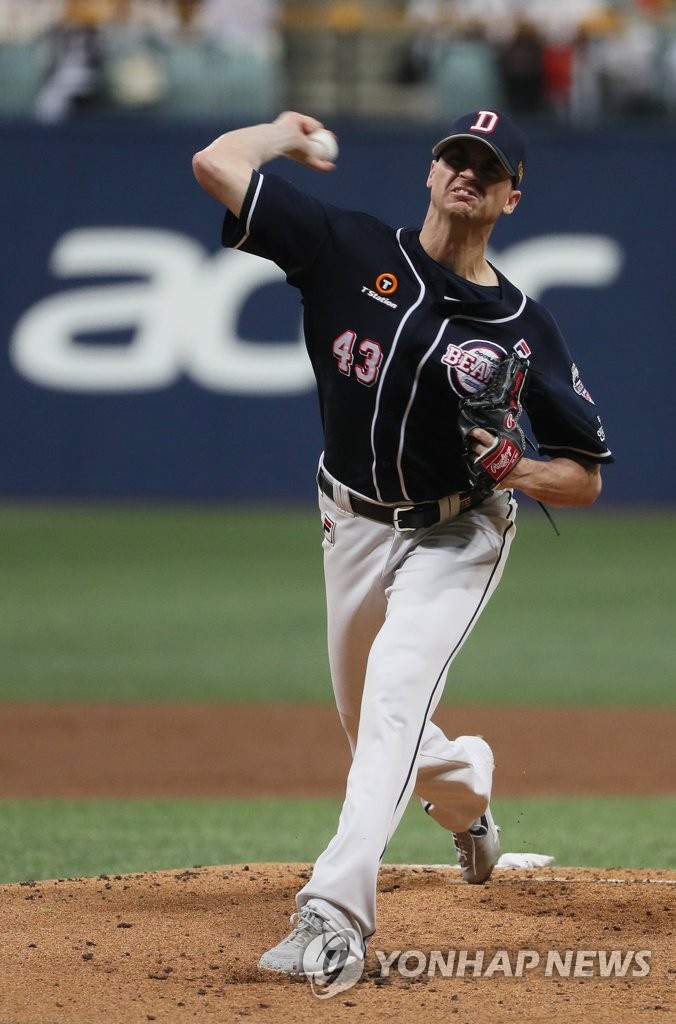 Frankoff pitched himself out of the jam, getting Song Sung-mun -- he of a .529 postseason batting average before Friday -- to ground out to first base after battling him to a full count.

The Heroes' bullpen kept their team in the game with four shutout innings after Brigham got the hook, but Frankoff remained sharp for the Bears and retired the side in order in both fifth and sixth innings.

The Heroes threatened to get on the board in the bottom seventh but baserunning miscues did them in.

Park Byung-ho led off the inning with a single and Jerry Sands drew a walk, which chased Frankoff from the game.

Song Sung-mun singled to right against new pitcher Lee Yong-chan, but Park pulled up almost halfway to home plate, although right fielder Park Kun-woo, apparently willing to concede a run, threw to second base. Park Byung-ho, though not a fast runner, would have scored easily on the hit.

Instead, that loaded the bases with nobody out, but the Heroes came up empty-handed again.

Pinch hitter Park Dong-won sent a fly to right in what could have been a sacrifice fly. Park Byung-ho started toward home but quickly returned to third base as Park Kun-woo made a strong throw home.

But Sands, thinking Park Byung-ho was going home, put his head down and tagged up to get to third. Sands was suddenly caught in a no-man's land, and was easily thrown out at second base.

Lee Ji-young, the next batter, grounded out to second to end the seventh inning.

Though they didn't ultimately need it, the Bears added a run in the top eighth.

Heo Kyoung-min reached on a throwing error by third baseman Song Sung-mun and moved to third after a steal and a groundout. Park Sei-hyok then picked up his second RBI of the game with a single through the middle.

The Heroes put a runner aboard with one out in the bottom ninth but Sands grounded into a 5-4-3 double play -- an oddly fitting end to a game in which the Heroes wasted two bases-loaded opportunities. 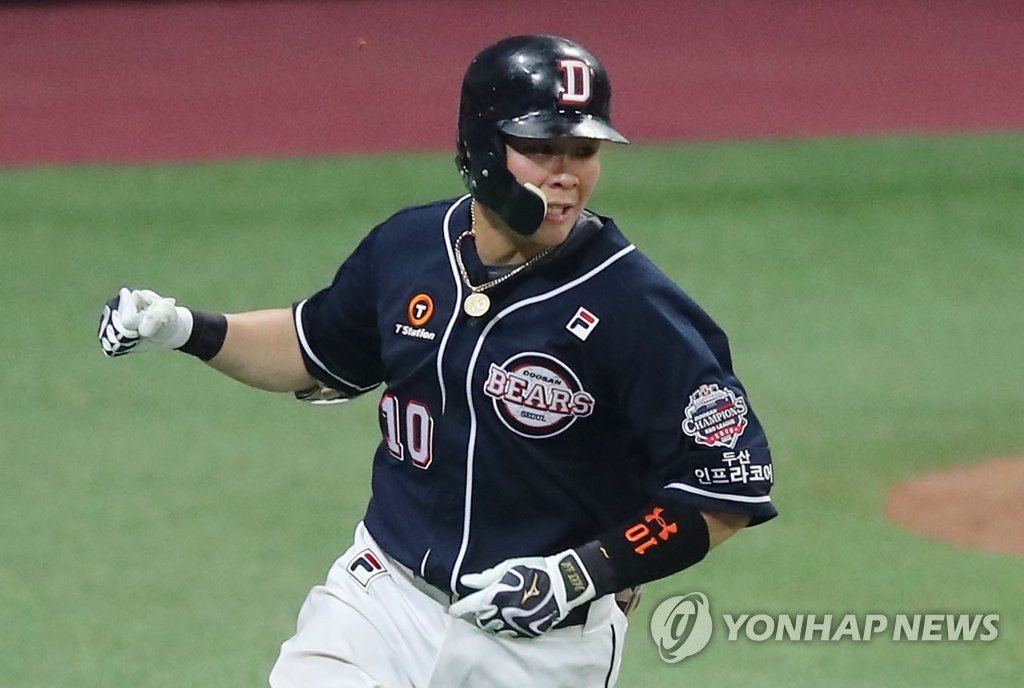 Bears blank Heroes to move within one win of S. Korean baseball championship

Bears blank Heroes to move within one win of S. Korean baseball championship