SEOUL, Oct. 26 (Yonhap) -- Things looked quite promising for the Kiwoom Heroes entering this year's Korean Series. They knocked off the LG Twins in four games in the best-of-five first round in the Korea Baseball Organization (KBO) postseason, and then swept the defending champions SK Wyverns in the next round.

They were swinging the bat with abandon. They were making tough plays on the field. Their relievers weren't giving up any runs. They looked like a buzzsaw going into the Korean Series.

Then the Doosan Bears happened. 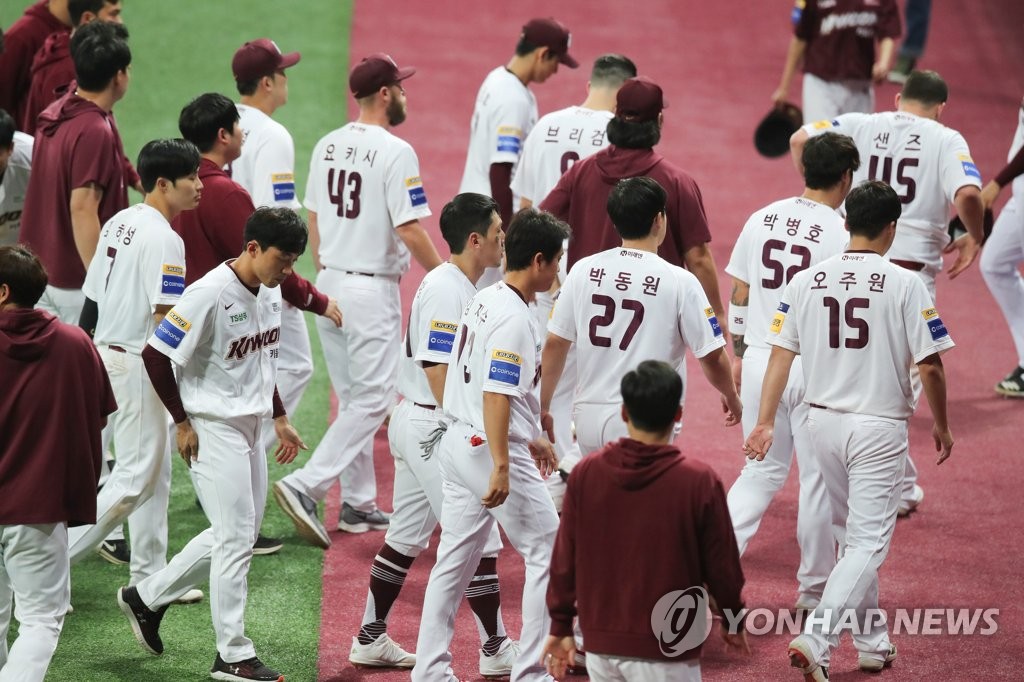 The Heroes got swept by the Bears in four straight games in the best-of-seven Korean Series, and the Bears put a merciful end to the lopsided contest with an 11-9 win in Game 4 on Saturday at the Heroes' home, Gocheok Sky Dome in Seoul.

As wells as the Bears played, the Heroes also shot themselves in the foot a few times in the series, with uncharacteristic defensive miscues and baserunning blunders. That their bullpen got knocked around hard clearly didn't help.

In Game 1, the usually steady shortstop Kim Ha-seong dropped a routine pop fly to open the bottom of the ninth inning with the score tied at 6-6. The Bears eventually loaded the bases, and Oh Jae-il knocked in the winning run with a single.

In the next game, the Heroes took a 5-3 lead into the ninth inning, when closer Oh Ju-won gave up a single and a double against the bottom third of the Bears' lineup. He was yanked right away without recording an out, and the next pitcher, Han Hyun-hee, served up two hits, including the game-winning base knock by Park Kun-woo.

The Heroes got shut out 5-0 in Game 3, after wasting a golden opportunity to score in the seventh with some head-scratching baserunning miscues. 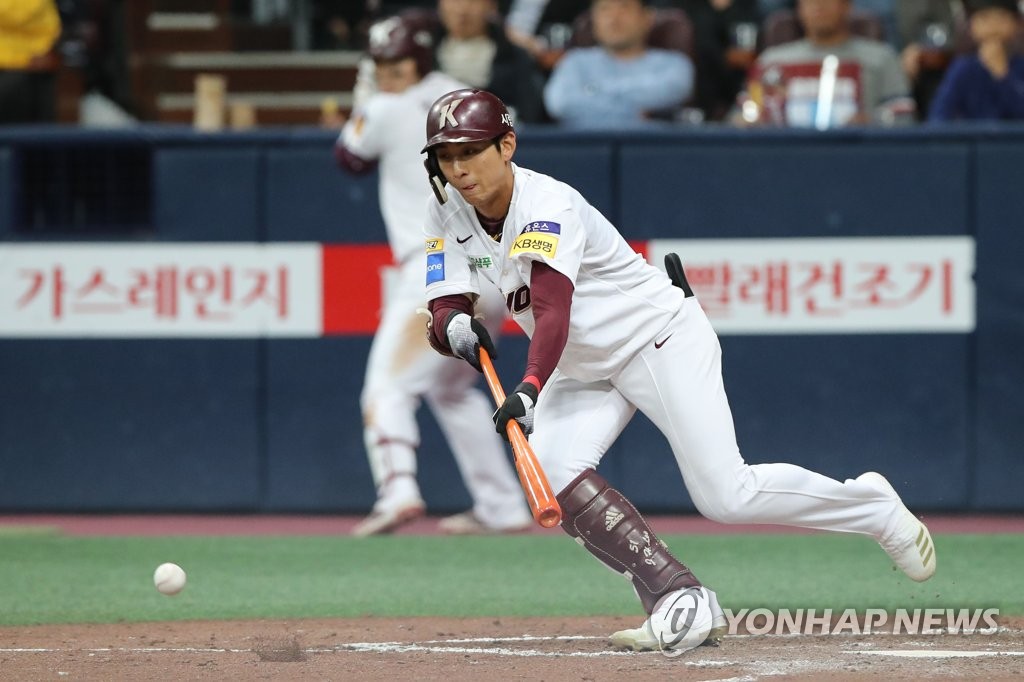 Park Byung-ho led off the inning with a single, and Jerry Sands drew a walk. Song Sung-mun then hit a single to right, but Park pulled up almost halfway to home plate, although right fielder Park Kun-woo, apparently willing to concede a run with a 4-0 lead, threw to second base. Though he doesn't have blazing speed, Park Byung-ho would have scored easily on the play.

The Heroes could still salvage some runs because the bases were now loaded with nobody out.

Pinch hitter Park Dong-won sent a fly to right in what could have been a sacrifice fly. Park Byung-ho started toward home but quickly returned to third base as Park Kun-woo made a strong throw home.

But Sands, thinking Park Byung-ho was going home, tagged up without checking the situation at the third base bag. Sands was suddenly caught in no man's land and was easily thrown out at second base.

Lee Ji-young, the next batter, grounded out to second to end the seventh inning.

The Heroes battled back valiantly in Game 4. After losing a 2-0 early lead, they scored six times in the bottom second for an 8-3 lead.

But with starter Choi Won-tae gone after two innings, the Heroes' bullpen failed to protect that lead once again, as the Bears scored one in the fourth and five more in the fifth.

The Heroes tied the game at 9-9 with two outs in the bottom ninth. But they'd already used up most of the bullpen trying to stay in the game, and Jake Brigham, their Game 3 starter from Friday, had to stay in for the top of the 10th after taking the mound in the ninth. 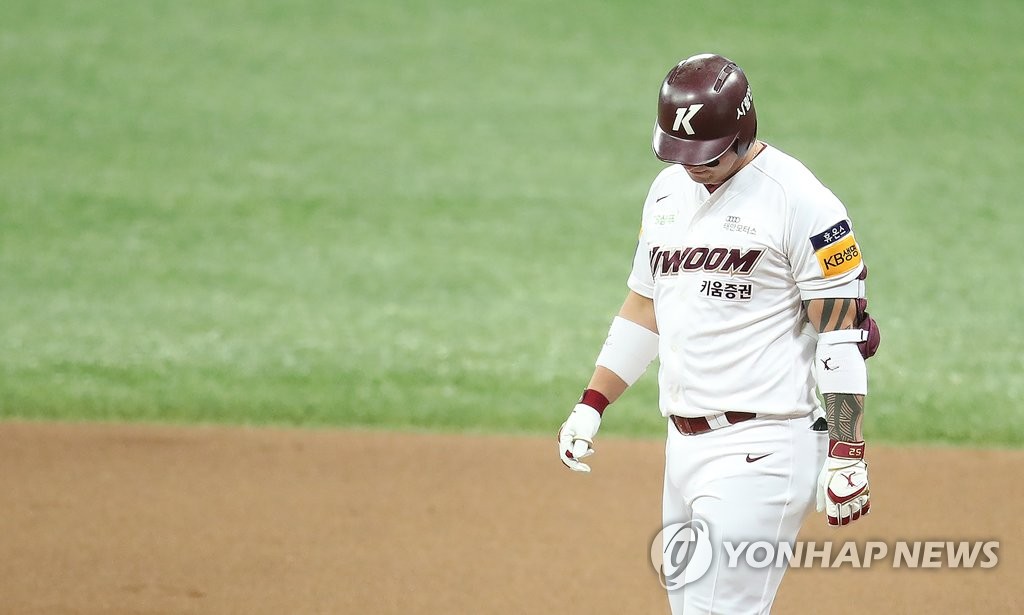 Brigham, who'd pitched three innings on Friday, gave up a leadoff double to Oh Jae-won. Three batters later, Oh Jae-il touched Brigham for a double to right that put the Bears up 10-9.

The last pitcher remaining in the pen, the struggling Oh Ju-won, relieved Brigham, and promptly served up a run-scoring single to Kim Jae-hwan.

The Heroes' bullpen didn't just run out of gas. They also ran out of options against the hot-hitting Bears.

Kiwoom manager Jang Jung-suk blamed the series loss on himself.

"I have no regrets, and I did everything I wanted to try in the Korean Series," Jang said. "We lost because I didn't have enough as the manager. Our players battled right through the end. They deserve a ton of credit."

Jang reserved his final words for his Doosan counterpart Kim Tae-hyung, who won his third Korean Series title in five seasons with the Bears.

"I learned so much from him," Jang said. "I wanted to say that when the series ended."