The Korea Baseball Organization (KBO) club said former Kiwoom Heroes bench coach Her Mun-hoe has agreed to a three-year deal with 750 million won (US$640,030) in total salary and 300 million won in signing bonus.

Her, 47, was born and raised in the Giants' home city of Busan, 450 kilometers southeast of Seoul, and played 10 seasons in the KBO, including the 2001 and 2002 seasons with the Giants. 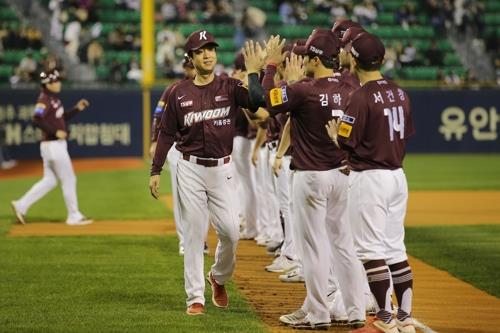 The Heroes got swept by the Doosan Bears in four straight games in the Korean Series that ended Saturday evening.

The Giants finished the regular season in last place with a record of 48-93-3 (wins-losses-ties). First-year manager Yang Sang-moon stepped down in July, and bench coach Kong Pill-sung served as interim manager for the rest of the season.

The Giants said Her has been a highly respected instructor known for his communication skills, strong leadership qualities and adaptability.

Her will be introduced at a ceremony scheduled for 10 a.m. on Friday at the Giants' home park, Sajik Stadium.