SEOUL, Oct. 28 (Yonhap) -- The government has confirmed that remains belonging to a Korean, forcibly brought by Japan to Tarawa Island in the central Pacific Ocean to work for its military during World War II, matches genetic information from a member of his family, data from a national forensic agency and the interior ministry revealed Monday.

The data, submitted to ruling Democratic Party lawmaker Kwon Mi-hyuk, revealed that a DNA test on a sample of the Korean man's remains and a South Korean man believed to be his son, showed with a 99.9999 percent chance of certainty that they had a parent-child relationship.

It was the first time the government had confirmed the identity of a forced labor victim in the Pacific Ocean. The government plans to have the remains repatriated early next year in cooperation with the United States and Japan.

The identification of the remains came after the government established an organ under the interior ministry in November last year to seek the repatriation of the remains of Koreans who were forcibly taken to battlefields in the war. Japan ruled the Korean Peninsula from 1910 to 1945, a time during which historians say millions of Koreans were mobilized into forced labor.

In April, the organ tasked with the repatriation of Korean remains received samples of the remains of 145 Koreans excavated on the island that were deemed to be possible subjects for DNA tests, from the U.S. government's Defense POW/MIA Accounting Agency. The remains were part of a larger set of remains of Asian people. 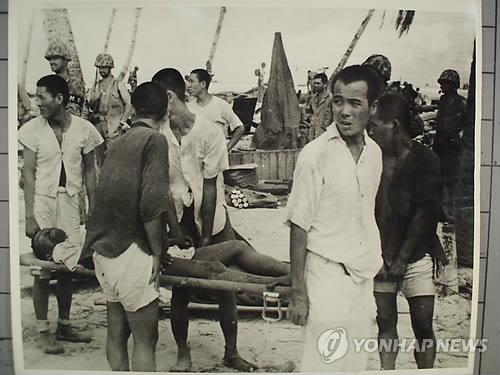 It also secured the DNA information of 184 family members of forced labor victims taken to a Pacific island in the former British protectorate of the Gilbert Islands, now the Republic of Kiribati.

In the process of identifying the samples of bone fragments, the "Tarawa No. 46" sample was the only one identified.

The arrival of the No. 46 remains, if it takes places, would be the first identification and repatriation of a Korean victim's remains from the Pacific Ocean region through the government's consultation with related countries.

Up to now, South Korean and Japanese civic bodies have returned the remains of Koreans who died after being forcibly taken to Japan and Sakhalin in the Russian Far East.

Kwon said the government has made a significant effort to identify for the first time a forced labor victim taken to the Pacific Ocean region.

She also urged the government to take measures to have the remains returned home at an earlier date. "On this occasion, I hope there will be speedy work to excavate more Koreans buried in the battlefields of the Pacific Ocean and secure them," she added.

The government plans to hold talks with Washington and Tokyo to discuss a way to have the Korean man's remains returned home from Hawaii, where they are kept.

The South Korean government needs to agree with the U.S. and Japanese governments on scientific grounds that the man is Korean in order to realize the repatriation.

According to government officials, the U.S. and Japan are working on a DNA test on samples of the man's remains. The government expects Washington and Tokyo will give Seoul a positive response in sending the remains to South Korea, as the results of the South Korean forensic agency's DNA test are reliable and clear enough for them to understand the man is Korean.

The repatriation of his remains, which the government originally planned to implement next month, is likely to take place early next year given Seoul's need to wait for the arrival of results of a DNA test from the U.S. and Japan, coupled with related negotiations and time required for the procedures for the repatriation.

Tens of thousands of remains belonging to dead Korean soldiers and workers are believed to be still buried in the major battle sites of World War II, including southern Okinawa, the South Pacific and Southeast Asia.

In the Battle of Tarawa, which the United States and Japan fought from Nov. 20-23, 1943, more than 6,000 people, including Korean laborers, were killed. According to government data, nearly 90 percent of the 1,200 Korean workers mobilized for the construction of the Japanese army's fortress lost their lives in the battle.