SEOUL, Oct. 28 (Yonhap) -- Political parties on Monday wrangled over whether the parliamentary speaker should refer key prosecution reform bills placed on a fast track to a plenary session set for this week.

National Assembly Speaker Moon Hee-sang is mulling whether to present the prosecution reform-related bills for consideration at a plenary meeting scheduled for Tuesday.

The bills refer to proposals to set up an independent unit to probe corruption allegations by high-ranking public officials and to give more investigative authority to police. They were placed on the fast track in late April, along with an election reform bill. 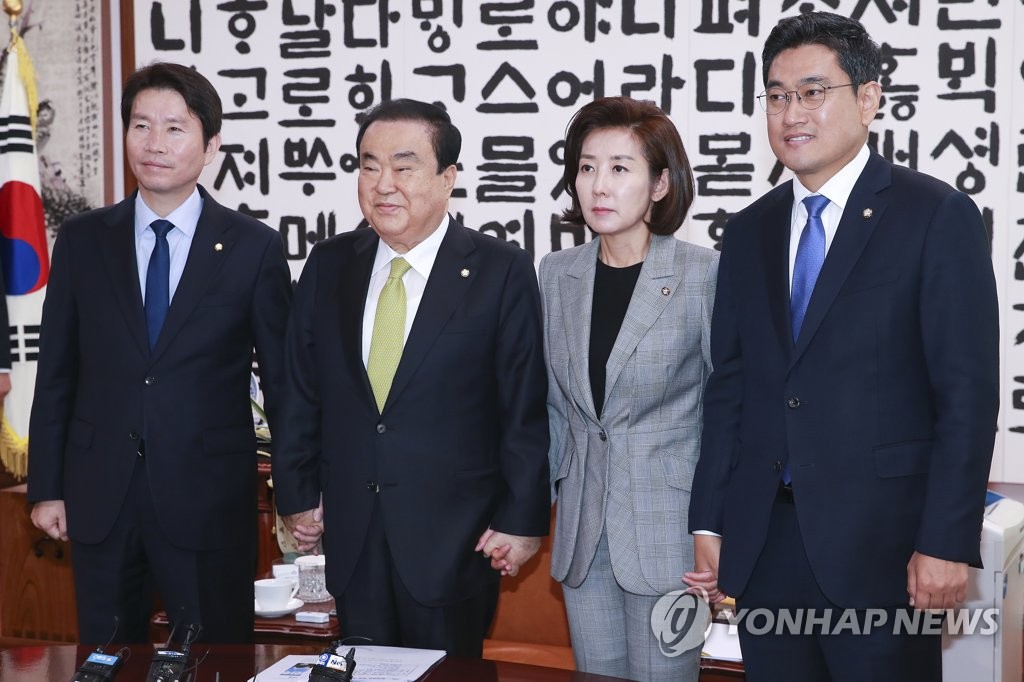 The ruling Democratic Party (DP) asked Moon to refer those bills to a plenary session to enable them to be put on the agenda.

Under the parliamentary law, a bill placed on the fast track needs to face a 180-day review by its related standing committee and a 90-day session by the legislation and judiciary panel to adjust the wording of the proposal.

The DP insists that as the legislation and judiciary committee, a key panel for the passage of bills, is in charge of reviewing the bills, it does not need to hold a separate 90-day evaluation session.

But the main opposition Liberty Korea Party (LKP) claims the potential referral will constitute a violation of law. The conservative party opposes the passage of the proposals this month, claiming that the panel should hold a review session.

"I'll carefully review (whether to submit it)," Moon said at a meeting with the floor leaders of the DP and two opposition parties.

Speaker Moon apparently has a plan to submit the reform bills to a plenary meeting for consideration but will likely wait for a multiparty deal before putting them on the agenda, parliamentary officials said.

Under the law, a bill placed on the fast track should be put on the table within 60 days of its referral.

Political tensions over the reform bills show no signs of easing. The DP and three minor parties reached a package deal to fast-track a set of political and judiciary reform bills earlier this year, despite objections from the LKP.

The DP called for prioritizing the passage of the special probe unit bill. But the other parties effectively rejected the proposal, citing the urgency of handling an election reform bill.