SEOUL, Oct. 29 (Yonhap) -- From creating a fund to compensate victims of Japan's wartime forced labor to entrusting a civilian panel with addressing the thorny issue, a flurry of proposals are raising cautious hope for a thaw in frosty ties between Seoul and Tokyo.

Diplomatic circles, scholars and media in both countries have put forward the ideas while Seoul and Tokyo have been exploring a diplomatic off-ramp -- or at least a path for de-escalation -- through a series of high-level or working-level talks in recent months.

"These proposals illustrate the resilience of the Seoul-Tokyo relationship at work, when both countries apparently feel fatigued about their ties having long been on a collision course," Nam Chang-hee, a professor of international politics at Inha University, said.

This week, Japan's Kyodo News reported that Seoul and Tokyo are weighing the idea that the government and companies in South Korea, with the participation of Japanese firms, set up a fund under the name of "economic cooperation," not as compensation for forced labor.

Seoul's foreign ministry rejected the report as "untrue," while reiterating its "openness" to searching for a solution "acceptable to the victims and people of both countries."

Later in the day, Kim In-chul, the ministry's spokesman, said that Seoul continues to communicate with Tokyo with a view to finding a "constructive" method.

"We respect the judiciary's decision (on forced labor) and then are making efforts with Japan to find a solution that will enable victims to receive reparation, while taking into account the bilateral relationship," he told a regular press briefing.

The "economic cooperation" fund appears to be in tune with Tokyo's reluctance to shoulder its legal responsibilities for forced labor. Japan claims that all reparation issues stemming from Tokyo's 1910-45 colonization of the peninsula were settled under a 1965 accord aimed at normalizing bilateral ties.

In an effort to settle the dispute, Seoul made the so-called one plus one proposal in June that South Korean and Japanese firms voluntarily create a fund to compensate the victims. But Tokyo rejected it, arguing a deal should not do any harm to Japanese firms.

The bilateral ties were then put on a slippery slope as Tokyo slapped new export restrictions on South Korea in July and removed Seoul from its list of favored trade partners the following month. Seoul views such export curbs as political retaliation for the court rulings.

After Japan's rejection of the one plus one formula, experts made a series of suggestions.

Many of them involved financial contributions from the Seoul government in a way to secure what they described as "higher moral ground" in the diplomatic tussle by encouraging Japanese firms to contribute to a fund completely of their own will.

There are also suggestions that the two countries reach an accord under which Tokyo publicly recognizes the illicit nature of the colonial-era forced labor and offers an apology to the victims, with Seoul shouldering the financial burden of compensating the victims.

Scholars also proposed installing a civilian advisory group and entrusting it with mapping out a solution, arguing that with such a method, the government can fend off or reduce political backlash if its solution falls short of victims' expectations.

Amid such ideas cropping up, Seoul's Foreign Minister Kang Kyung-wha admitted last week that though the gaps between the countries over the forced labor issue have been reduced a little bit, they still remain big.

"We can't openly talk about the concrete details of the discussions," she told a press conference last week. "Our position is that the judicial process should fully proceed, and we are carrying out the discussions in consideration of other various factors, including the one plus one proposal." 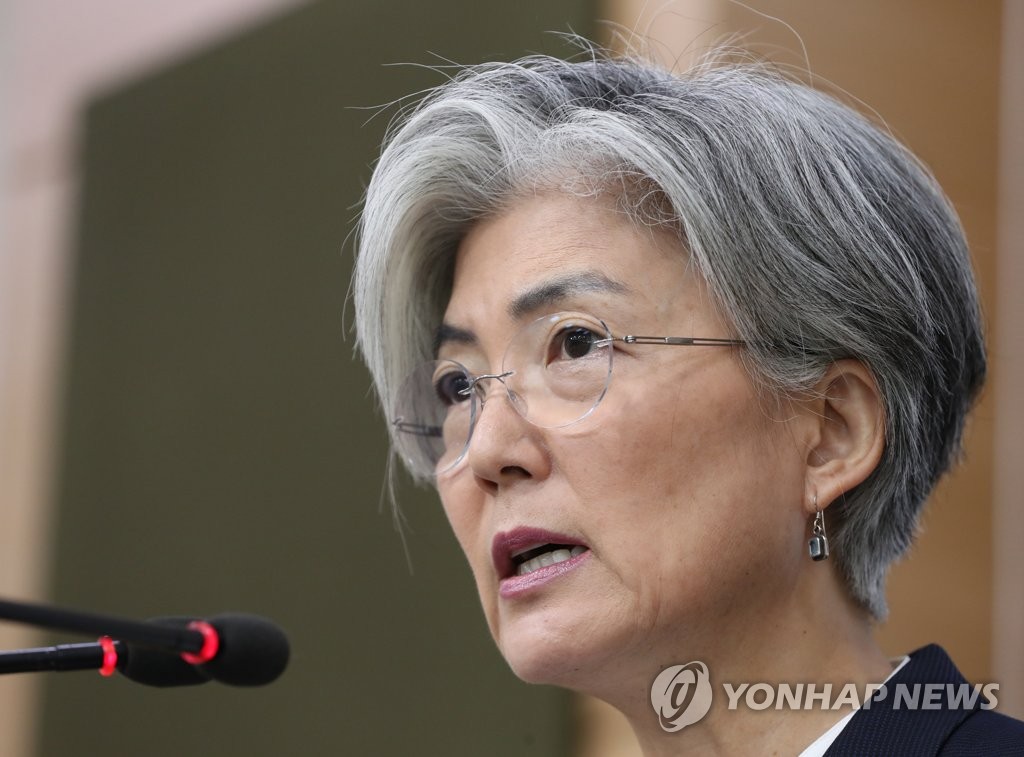 Seoul has been searching for a solution that would satisfy victims in sync with the top court rulings and prevent further deterioration of ties.

What has been adding complexities into Seoul's consideration of the solution is the different situations of the victims, who have already finished court proceedings, are currently carrying them out or have yet to initiate them.

Pressure has also come from Washington, which has been prodding its two core Asian allies into seeking to move past their historical feud and look ahead to confront security challenges such as North Korea's nuclear arsenal.

The United States has in particular pressured South Korea to reverse its decision to terminate its military information-sharing pact with Japan. Seoul says it can retract the decision when Tokyo lifts its export restrictions. The pact is set to expire on Nov. 23 unless Seoul cancels the termination decision.