SEOUL, Oct. 30 (Yonhap) -- The United States deployed an RC-135U reconnaissance plane to one of its air bases in Japan, an aviation tracker said Wednesday, a move seen as aimed at beefing up surveillance of North Korea.

One RC-135U Combat Sent arrived at Kadena Air Base in Japan's Okinawa on Tuesday from Offutt Air Force base in Nebraska, Aircraft Spots said in a Twitter post.

The deployment came amid concern the North could conduct additional missile launches. A military source said that movements of transporter erector launchers (TEL) used to fire missiles have been detected in North Korea.

As the latest in a series of major weapons tests, North Korea fired a new type of submarine-launched ballistic missile (SLBM), the Pukguksong-3, from waters off its east coast on Oct. 2.

In May, the U.S. deployed the spy plane to its base in Japan, and it then flew over Seoul and the surrounding area. The deployment came on the heels of the North's test-firings of ballistic missiles believed to be its version of Russia's Iskander. 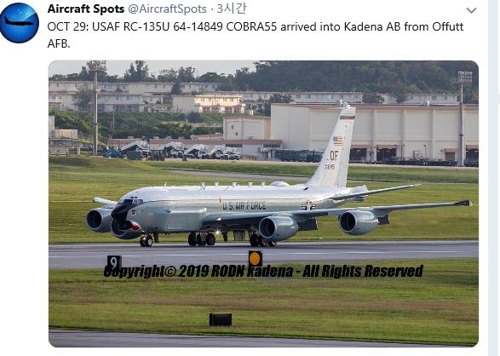