SEOUL, Oct. 30 (Yonhap) -- Chances are low of North Korea expressing condolences over the passing of the mother of President Moon Jae-in, but leader Kim Jong-un could still be contemplating the idea because the two leaders have developed relations through summits, an expert said Wednesday.

Moon's mother, Kang Han-ok, passed away at the age of 92 on Tuesday afternoon after reportedly suffering from an illness for years. Moon plans to hold a "calm" family funeral without accepting condolence calls or flowers during a three-day mourning period, according to the presidential office.

Though the possibility appears to be low in view of the recently frayed ties between the two Koreas, experts are hoping that the North could send a condolence message or delegation for her death given the "special" ties formed between North Korean leader Kim Jong-un and President Moon through their four meetings since last year.

Moon and Kim held three summits last year, in April, May and September. Moon traveled to Pyongyang for the September summit and invited Kim to South Korea in a reciprocal visit, though Kim's trip to the South did not materialize. They also met briefly in late June this year at Panmunjom along with U.S. President Donald Trump.

"Moon and Kim have met four times since last year and appear to respect each other," Yang Moo-jin, a top North Korea expert at the University of North Korean Studies, said. "Chances might be low, but North Korea could be mulling over sending a condolence message or delegation in a humane gesture and also possibly to confirm mutual trust of the leaders and advance inter-Korean relations." 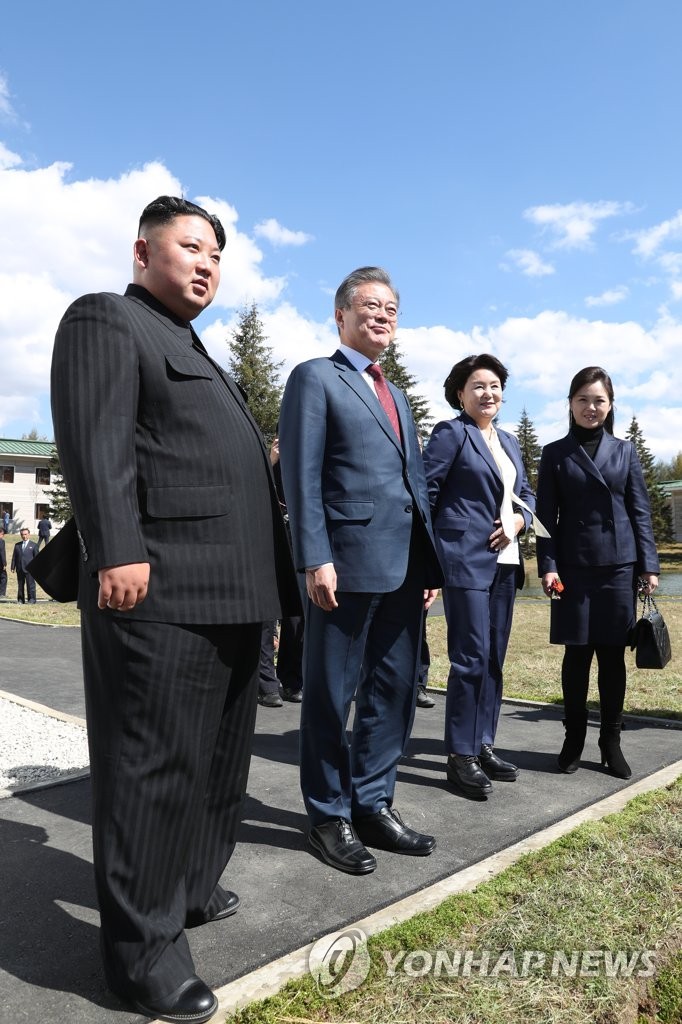 North Korea has a history of using funerals of major figures as a means to signal reconciliatory messages.

When former South Korean President Kim Dae-jung, the architect of the sunshine policy of engaging North Korea, died in 2009, then North Korean leader Kim Jong-il sent a condolence message to his bereaved family the next day and also sent a delegation of special envoys to his funeral.

For the death of Lee Hee-ho, the wife of late President Kim Dae-jung in June this year, North Korean leader Kim Jong-un had his younger sister, Kim Yo-jong, deliver a condolence message and flowers to the South, raising hopes that it could help break a logjam in inter-Korean relations.

Many, however, remain skeptical that the North will take such action this time as inter-Korean ties have been getting worse ever since, with almost all cross-border talks and cooperative projects on hold.

On Tuesday, North Korea turned down Seoul's proposal to hold a working-level meeting to talk about the fate of the Mount Kumgang resort in the communist state, insisting on discussing the issue in writing.

South Korea made the dialogue offer a day earlier in a counterproposal to North Korea's demand that Seoul remove all of its long-abandoned facilities from the mountain resort in an apparent threat to end the tour program, which was regarded as a major cooperative project.

North Korea has been inactive in cross-border talks and projects ever since progress in denuclearization negotiations with the U.S. has slowed to a halt.

The North has ramped up its criticism of South Korea for relying on the U.S. for its cross-border policy, urging it to take the lead in moving relations between the two Koreas forward. Pyongyang's media sometimes levels harsh criticism against President Moon.

A government official said that expectations are not high that the North will use the death of the president's mother as a chance to take such a reconciliatory gesture at a time when it continues to lash out at the South.

"The possibility appears to be very slim that the North will send a condolence message or delegation this time," he said on customary condition of anonymity. "North Korea tends to double down when it criticizes South Korea without providing mixed signals."

Asked whether the North has expressed an intention to convey its condolences for the death of the president's mother, Lee Sang-min, spokesperson of the unification ministry handling inter-Korean affairs said, "No."

"With regard to the funeral of the president's mother, the unification ministry has nothing special to share with you," he told reporters during a regular press briefing.