SEOUL, Oct. 30 (Yonhap) -- The United States did not demand South Korea share the expenditure for its deployment of strategic assets, such as nuclear-capable bombers, to or near the peninsula in the allies' recent defense cost-sharing talks, a Seoul official said Wednesday.

Speculation has persisted that Washington has been asking Seoul to chip in for the cost for the dispatch of strategic assets as part of its payments for the upkeep of the 28,500-strong U.S. Forces Korea under the Special Measures Agreement (SMA), a bilateral cost-sharing deal.

"During the previous two rounds of SMA talks, the U.S. did not request that we share the cost for the deployment of strategic assets," the official said on condition of anonymity.

Strategic assets refer to formidable U.S. military hardware such as nuclear-powered submarines and aircraft carriers, which are often used as a show of force to deter provocations or aggression by potential adversaries.

Critics argue that should Seoul shoulder the cost for operations involving such U.S. military assets, it could amount to South Korea sharing the burden for America's broader security missions well beyond the peninsula.

The allies held two rounds of SMA negotiations in Seoul last month and in Honolulu earlier this month. They have been under pressure to clinch the 11th SMA by the end of this year, when the current one-year deal, struck in February, is set to expire.

In the SMA negotiations, Seoul has argued that the cost-sharing talks must proceed within the existing SMA framework that covers the expenses only for the upkeep of the USFK, not the temporary dispatch of strategic assets from Guam or other U.S. bases outside the peninsula.

The allies plan to hold another round of SMA negotiations in Seoul next month.

Under the 10th SMA, South Korea agreed to pay $870 million this year. Reports say the U.S. wants South Korea to pay $5 billion in the ongoing negotiations. 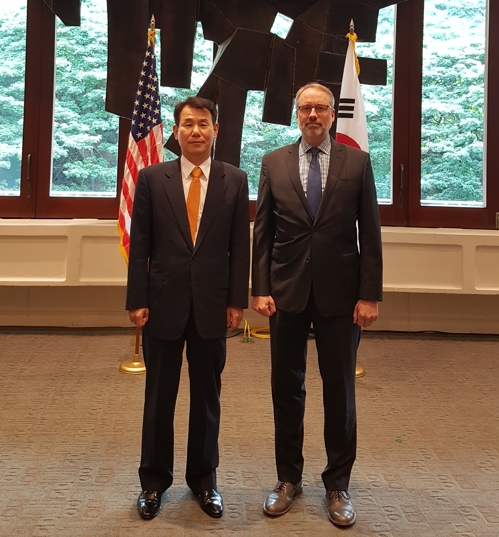