SEOUL, Oct. 30 (Yonhap) -- The chief of South Korean textile and chemical conglomerate Hyosung Group was called in to the police Wednesday for questioning about allegations of embezzlement, according to officials at the National Police Agency (NPA).

Hyosung Group Chairman Cho Hyun-joon arrived at the NPA at around 7 a.m. before being grilled by police investigators probing corruption cases involving him and his family, they said.

Cho is suspected of embezzling several billions of won in company money to pay his litigation costs, including lawyer fees, in the process of having coped with various criminal cases in which he was a suspect since 2013.

"The questioning of Cho is expected to continue until late night, and the case will be sent to the prosecution soon," an official at the NPA said. 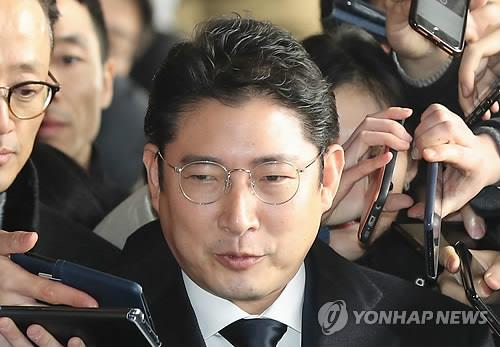 Hyosung has reportedly signed legal advice contracts with renowned lawyers, including those who formerly served as senior prosecutors. But police suspect that the Hyosung lawyers have actually been involved in lawsuits involving the Cho family, instead of giving advice on company management.

The 50-year-old Cho, a grandson of the late Hyosung founder Cho Hong-je, took over the group chairmanship from his father Cho Suck-rai in 2017. Hyosung, the nation's 22nd-largest conglomerate in terms of assets, has 57 affiliates, with its businesses stretching from textiles, chemicals and trading to heavy industries and construction.

The People's Solidarity for Participatory Democracy, a civic group, filed a complaint in April accusing the Cho family of having the Hyosung conglomerate pay for their litigation expenses and asking prosecutors to investigate their embezzlement charges.

On Sept. 6, the Seoul Central District Court sentenced Chairman Cho to two years in jail in a ruling on his corruption cases but didn't order his immediate detention.

Cho was indicted in January for allegedly incurring 17.9 billion won (US$16.6 million) in losses for a Hyosung subsidiary by inflating its corporate valuation, gaining illicit profits of 1.2 billion won between 2008 and 2009 via the sale of 38 art pieces to a Hyosung affiliate at higher prices than their appraised values.