WASHINGTON, Oct. 30 (Yonhap) -- South Korea's top envoy to the United States said Wednesday that he expects the U.S. and North Korea to resume denuclearization negotiations before the end of the year.

Ambassador Lee Soo-hyuck made the remark to reporters in his first briefing since taking office last week, noting that his prediction is based only on the South Korean government's assessment of the last round of negotiations that took place in Sweden early this month.

The talks ended without an agreement, with the North accusing the U.S. of failing to come up with a new proposal on how to trade the regime's denuclearization for sanctions relief and other concessions. 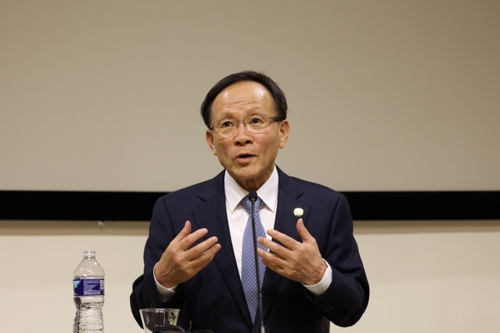 "If you look at the history of nuclear negotiations, one minute you think they won't meet again, but two or three months later, they are meeting again," the ambassador, citing his own experience as Seoul's chief negotiator to the six-party talks on North Korea's denuclearization in 2003.

"We've seen this happen over and over again, so I don't think we should jump to conclusions," he said, adding that negotiating parties sometimes choose to portray talks as having broken down or produced results as part of their negotiating tactic.

Offering his personal observation, Lee said he doesn't believe the American and North Korean negotiators involved view the Stockholm talks as having broken down.

"This kind of thing has happened many times, so I think they will be able to meet again," he said.

On the question of when, the ambassador said he does not know, but suggested another meeting could take place before an end-of-year deadline set by North Korean leader Kim Jong-un.

"I don't think (the U.S. and North Korea) will just sit still and say it's over," he said, adding that he plans to meet with Washington's chief negotiator, U.S. Special Representative for North Korea Stephen Biegun, on Thursday.

Meanwhile, negotiations between South Korea and the U.S. have also been under way to renew a cost-sharing deal for the upkeep of 28,500 American troops stationed in the South.

At issue is the amount and scope of Seoul's contributions, with reports suggesting the U.S. wants South Korea to pay US$5 billion next year, a more than five-fold increase from this year.

The ambassador said the negotiations are still in the early stages and he understands there has been no discussion of the specific amount and scope sought from Seoul.

"I don't think (the U.S.) has presented a breakdown of how many million (dollars) it wants for each category," he said.

There is no question Seoul will have to increase its contributions in line with U.S. President Donald Trump's demands, but there is also no reason to obsess over what the exact figure will be, the ambassador stressed.

"I don't think anyone believes that figure (sought by the U.S.) will be attained," he said. "From our perspective, (the U.S.) is asking for an incredibly large amount, so we will have to figure out the U.S.' true intentions in the course of the negotiations."

For now, the ambassador said it's unclear to him whether the U.S. wants its requested figure to be paid next year or over a period of several years.

"As far as I understand, I don't think there is a clear definition of what that number means," he said. "If we negotiate thoroughly, I believe we will be able to produce a number that won't disappoint our people," Lee said. "If we approach this with logic, without giving ground, I think we'll be able to prevent a situation where we end up with an unexpected figure."