"It's regrettable that (prosecutors) brought the issue to the court before win-win solutions could fully work," Finance Minister Hong Nam-ki said in a message posted on his Facebook page.

Lee and Park were not taken into custody. The two will face trials on charges of running a transportation business without a license.

South Korea -- which has an advanced information and communication technology environment -- is capable of providing new mobility services that are already available in more than 65 countries, Hong said.

But he said close coordination for mutual benefit is a must in the new industry to work out the differences between relevant parties.

At issue will be whether Tada should be considered a type of rental car service or an illegal taxi service operating without a license.

Tada -- which means "to ride" in Korean -- was launched in October 2018 and has rapidly grown to become Korea's leading ride-offering service. Tada's app, which boasts over 1.2 million users, links customers to vans driven by one of the service's pool of drivers.

VCNC operates Tada with 1,400 vans rented from SoCar and has 9,000 contract drivers.

Tada offers ride-hailing services for 11-seat vans instead of sedans. Local transport laws allow rental cars with a capacity of 11-15 seats to be legally leased with a driver.

Tada argues its business is within legal boundaries based on a written exception that specifically allows rented vans to be offered with drivers.

In July, the transport ministry came up with a plan to help settle the conflict between taxis and new platform companies and seek mutual growth.

In the ministry's proposal, car-hailing services like the rental van-hailing service Tada should chip in a certain portion of their earnings to a state-managed fund to be established for the purchase of taxi driver licenses amid oversupply.

VCNC and the taxi industry refused to accept the government's proposals. But the ministry said it will push forward with them despite the lack of agreement.

In Korea, taxi drivers have long been criticized for reckless driving, rudeness and selectively picking up passengers depending on their destination, so there has been rising demand for differentiated but inexpensive ride services.

Although Tada set its prices higher than those of conventional taxis when it started last year, its fares are currently not very different from those of normal taxis in Seoul, which rose 19 percent to a starting rate of 3,800 won (US$3.30) in February. 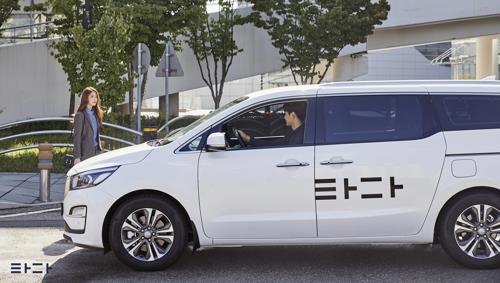