"The projectiles were fired from areas in South Pyongan Province in the afternoon," the JCS said in a brief release, adding, "Our military is monitoring the situation in case of additional launches and maintaining a readiness posture."

No other details were immediately available, including the projectiles' type and flight range.

It is the 12th time that North Korea has carried out such a weapons test so far this year, with the last test-firing taking place on Oct. 2, when it tested a new type of submarine-launched ballistic missile, the Pukguksong-3, from waters off its east coast.

During the previous 10 rounds of tests, the North test-fired short-range projectiles, including its version of Russia's Iskander ballistic missile and a "super-large" multiple rocket launcher system.

The latest firing came a day after North Korean leader Kim Jong-un sent a condolence message over the death of President Moon Jae-in's mother, a surprise move that had briefly raised hope for the possibility of Pyongyang softening its stance on Seoul.

Inter-Korean ties have been at an impasse amid no progress in denuclearization negotiations.

Last week, North Korea demanded that Seoul remove all of its long-abandoned facilities at the Mount Kumgang resort in its territory, and turned down Seoul's proposal to hold a working-level meeting to talk about the fate of the long-suspended tourism project.

Thursday's test also came as the North has stepped up pressure on the U.S. to meet the year-end deadline that it has set for Washington to come up with a new proposal on how to exchange denuclearization measures and sanctions relief.

Earlier this month, the two sides held the first nuclear talks since February's no-deal summit between U.S. President Donald Trump and North Korean leader Kim Jong-un, but the meeting in Sweden ended without an agreement, with the North accusing the U.S. of failing to put forward a new proposal. 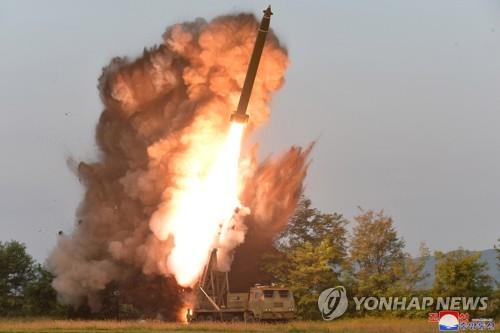