On Thursday, South Korea's military said that the North fired two short-range projectiles from a western region toward the East Sea, saying that both flew about 370 kilometers with a maximum altitude of around 90 km.

"The Academy of Defense Science of the Democratic People's Republic of Korea succeeded in another test-fire of super-large multiple rocket launchers on Thursday afternoon," the Korean Central News Agency said.

"The perfection of the continuous fire system was verified through the test-fire to totally destroy with super-power the group target of the enemy and designated target area by surprise strike of the weapon system of super-large multiple rocket launchers," it added.

North Korean leader Kim Jong-un expressed "satisfaction" over the test-firing and sent congratulations to the national defense scientists developing the "self-defensive military muscle of the country," it said.

Kim apparently did not supervise the weapons test. 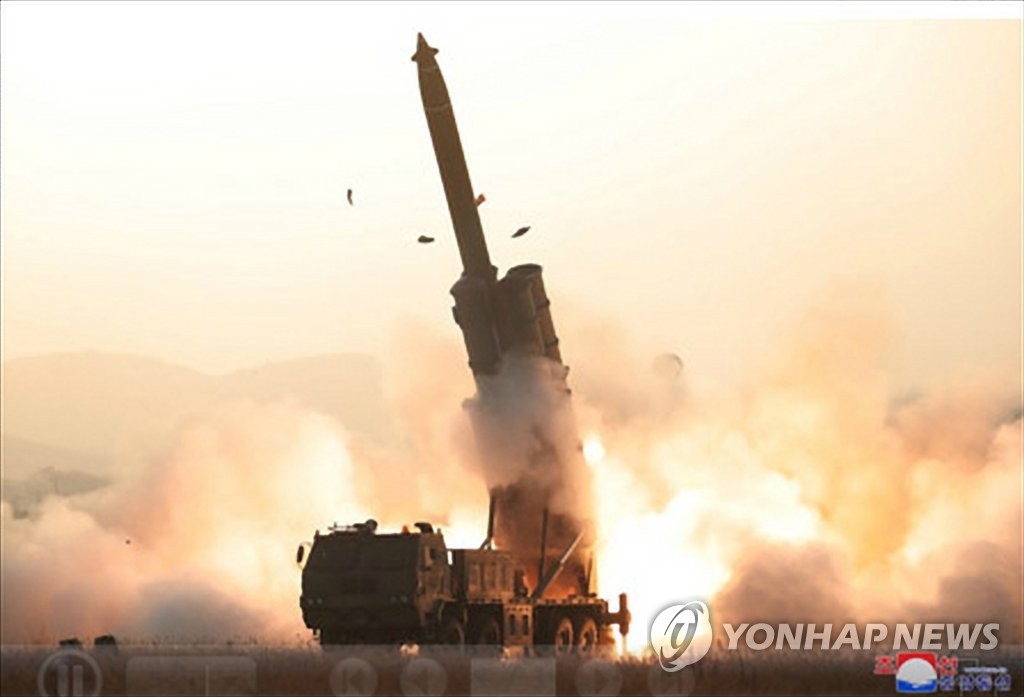 Thursday's launch marked the 12th weapons test North Korea has conducted this year. It came about a month after the North said that it successfully test-fired a new-type of sea-based ballistic missile, saying the success "ushered in a new phase" in its self-defense capabilities.

The North tested the weapon twice before, once in August and again in September.

The September test was considered a failure because state media did not mention the firing was a success. Leader Kim also suggested at the time that it failed to produce intended results, saying that the remaining step is to carry out the "running fire test which is most vivid character in terms of the power of multiple rocket launcher."

This week's test is considered a move to make up for the September failure.

The latest weapons test appears to be aimed at strengthening its diplomatic hand against the United States amid little progress in denuclearization negotiations.

North Korea and the U.S. resumed talks earlier last month after months of a stalemate caused by the breakdown of a summit between Kim and U.S. President Donald Trump in February. The talks fell apart again as the two sides failed to reconcile the gaps over how to match Pyongyang's denuclearization steps with Washington's sanctions relief.

The North has stepped up its calls for Washington to come up with a proposal acceptable to it before a year-end deadline set by its leader Kim. It said that it would not return to the negotiating table unless the U.S. drops its hostile policy, apparently demanding security guarantees and lifting of sanctions imposed against its regime.

Thursday's weapons test also came a day after North Korean leader Kim sent a condolence message over the death of President Moon Jae-in's mother, a surprise move that had briefly raised hope for the possibility of Pyongyang softening its stance on Seoul.

Inter-Korean ties have been at an impasse amid little progress in denuclearization negotiations.

In a recent setback and apparent indication of Pyongyang's frustration with the lack of progress in cross-border projects due to global sanctions, North Korea last week asked South Korea to remove its facilities built for a long-suspended joint tour program to Mount Kumgang on its east coast, saying that it will build its own international tourism zone there.

The decision is a follow up on North Korean leader Kim's directive to destruct all "unpleasant-looking" South Korean facilities there. On Monday, the South offered to hold working-level talks about the issue, but the North turned the proposal down the following day