SEOUL, Nov. 1 (Yonhap) -- All non-essential public vehicles will be banned from roads every other day in the capital area and in six metropolitan cities for four months beginning in December under the government's measures to limit fine dust pollution announced Friday.

Under the measures unveiled after Prime Minister Lee Nak-yon presided over a meeting of a special policy committee on fine dust, grade 5 emission vehicles, mostly diesel cars built before 2005, will be barred from roads in the capital area from March next year.

The government's decision to strongly regulate the emissions of dust particles also came as South Korea suffered high levels of harmful fine dust for the second consecutive day on Friday, due mainly to influx of yellow dust particles from abroad. 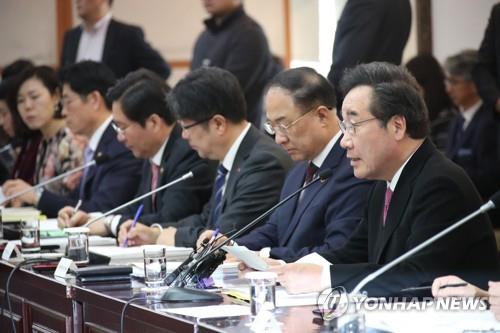 If ultrafine dust pollution reaches "warning" and "severe" levels, all vehicles owned by civil servants and employees of public institutions will be banned from the roads in Seoul and other major cities. The government's fine dust crisis management manual calls for different sets of countermeasures in accordance with four crisis levels -- concern, caution, warning and severe.

The government will also reduce the operations of coal-fired power stations as much as possible this winter, as long as a stable electricity supply is guaranteed.

In addition, the government will reinforce its subsidy program for the accelerated retirement of dilapidated diesel vehicles and overhaul acquisition and ownership tax systems for their owners. The planned shutdown of six old coal-fired power stations will be advanced by one year to 2021, while air purifying facilities will be installed at all subway stations nationwide by 2022.

If all government countermeasures are implemented as planned, the nation's annual average ultrafine dust level will fall by more than 35 percent by 2024 from the 2016 level.

Lee said cooperation with the Chinese government has been proceeding steadily. "Both countries have confirmed their will to enhance bilateral cooperation over fine dust through high-level talks and joint researches and projects will continue," Lee said at the committee meeting. 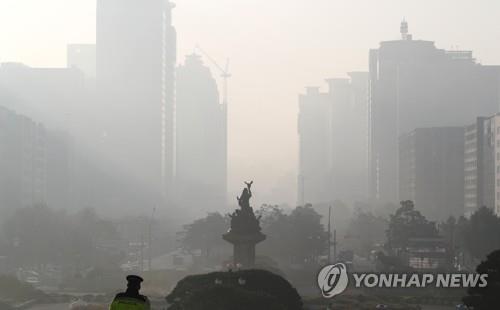 South Korea has been struggling to deal with fine dust particles both from home and blowing in from China, as well as yellow dust from Mongolia during the winter and spring seasons.

Meanwhile, the Korea Meteorological Administration (KMA) and other government agencies said fine dust concentrations remained at high levels across much of the country Friday, except parts of western coastal areas.

Jeju's provincial government issued an advisory for PM 10, or fine dust particles smaller than 10 micrometers in diameter, at 7 a.m., with the southern resort island's PM 10 figure surging to 175 micrograms per cubic meter at that time. Jeju's air quality will return to normal Saturday, according to the National Institute of Environmental Research's Air Quality Forecasting Center.

Officials at KMA and the Air Quality Forecasting Center said yellow dust that originated from southern Mongolia and northeastern China between Sunday and Monday has steadily affected the air quality over the Korean Peninsula.

The KMA said fine dust will return to normal in almost all parts of the nation on Saturday, except for Gwangju, a southwestern metropolitan city, and nearby North Jeolla Province.

Meanwhile, the so-called PM 2.5 level of ultrafine dust, or the amount of particles smaller than 2.5 micrometers in diameter, remained at normal to bad levels nationwide.