"I don't see missile capabilities now being developed by North Korea as a grave threat to our national security," Chung said during the National Assembly Steering Committee's audit into Cheong Wa Dae, the presidential office.

Chung made the remarks after Rep. Kim Jung-ho of the ruling Democratic Party asked whether public concern about North Korea's security threat is groundless if South Korea overwhelms the North in terms of economic power and defense budget.

The top security adviser's parliamentary appearance also came after the Pyongyang regime fired two short-range projectiles from a western region toward the East Sea on Thursday amid a lack of progress in denuclearization talks with the United States and chilled inter-Korean ties.

Asked again by Kim if the North was ill-mannered for firing its new super-large multiple rocket launcher on the day of Moon's late mother's funeral, Chung said the firing took place after the president returned to Cheong Wa Dae from the funeral. 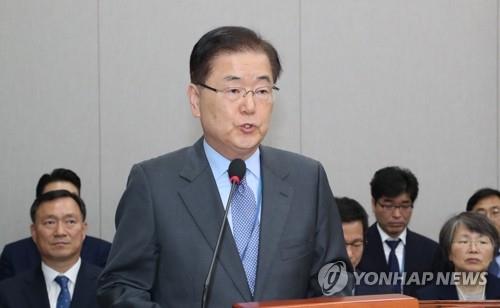 Chung also said Seoul has always been closely monitoring North Korea, when asked whether the government was aware of the possibility of the North's latest provocation.

"I cannot go into details, but our military has conducted no fewer missile tests than North Korea. We're absolutely superior to North Korea in terms of missile defense and interceptor abilities but will continue to pursue further development," the presidential adviser said.

He also said North Korea's recent short-range missile launches cannot be seen as a violation of an inter-Korean military agreement reached on Sept. 19, 2018, and South Korea is still waiting for the United Nations Security Council's decision on whether to impose additional sanctions on the North for its missile launches.

Asked to comment on North Korea's controversial control of the western border island of Hambak, claimed by some civic activists and media as South Korean territory, Chung said the island located north of the Northern Limit Line, the de facto maritime border line, has been under the control of the North's military since the end of the 1950-53 Korean War.

As for relations with Pyongyang, Chung said the Moon government will continue to make efforts to resume dialogue with the North and pursue positive development in inter-Korean relations.

"North Korea has conducted 12 short-range and submarine-launched ballistic missile tests since May and inter-Korean relations are now in a difficult phase ... The Korean Peninsula peace process has just begun and we have a long and rough road ahead," he said.

He also commented on U.S. President Donald Trump's attitude towards the alliance with South Korea. He explained that Trump's negative comments on South Korea in the past were mostly attributed to his misunderstanding about the South Korea-U.S. alliance and relationship but his recent remarks are different.

Chung said the Moon government still has no intention to renew the General Security of Military Information Agreement, or GSOMIA, with Japan, though Washington has asked Seoul to retract its decision to withdraw from the bilateral military accord.

Asked by an opposition lawmaker not to depend on Pyongyang's goodwill as far as a war is concerned, the Cheong Wa Dae official said North Korea is not in a situation to recklessly start a war. He was also asked if North Korea is a normal state and said he and other officials are sufficiently aware that the North is not a normal state.