SEOUL, Nov. 1 (Yonhap) -- U.S. Forces Korea (USFK) said Friday it does not oppose South Korea's project to build a floating solar power plant near the Saemangeum reclamation area on the west coast amid speculation that those facilities might affect fighter pilots.

On Thursday, the local daily Chosun Ilbo reported that the USFK raised concern that light reflecting from solar panels might disrupt its flight operations, but the Korea Hydro & Nuclear Power Co. rejected such complaints.

"After careful consideration and evaluation of the proposed Saemangeum photovoltaic power generation project, USFK has no objection to the project," the U.S. military said in a statement sent to Yonhap News Agency.

South Korea has been pushing to build the world's largest floating solar power plant in the Saemangeum area in the city of Gunsan, North Jeolla Province, to produce electricity as part of its renewable energy initiatives.

A few kilometers away from the plot is the Kunsan Air Base assigned to the United States' Seventh Air Force.

Following the report, the defense ministry here said on Thursday that USFK and South Korea agreed to cooperate with each other regarding the matter, and the Saemangeum Development and Investment Agency also pledged "active discussions" with the U.S. not to let the project cause any disruption to its military operations. 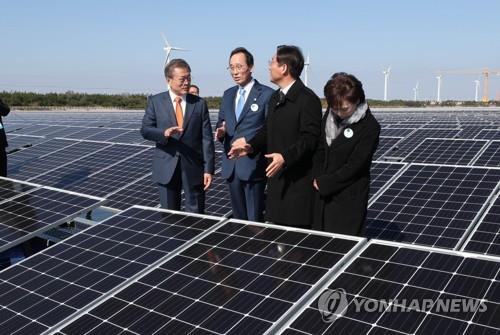