In particular, he plans to use his three-day trip to Bangkok as a chance to drum up support for the South Korea-ASEAN special summit to be held in Busan late this month.

The president will begin his official activity there by attending a "gala dinner" hosted by Thailand, this year's rotating ASEAN chair. 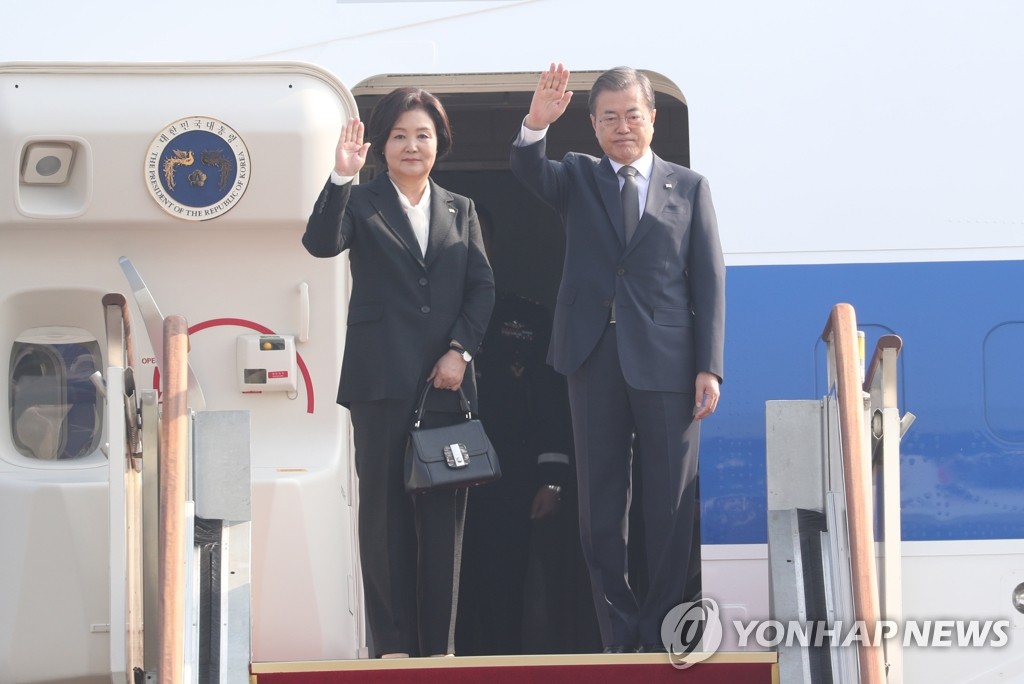 In the gathering, Moon will request attention and support for South Korea's successful hosting of the two-day Commemorative Summit with ASEAN to open on Nov. 25 and the ensuing separate group summit with five Mekong countries, Cambodia, Myanmar, Laos, Vietnam and Thailand, according to Cheong Wa Dae.

On Monday morning, he is scheduled to attend the ASEAN Plus Three summit, which will likely be joined by Japanese Prime Minister Shinzo Abe and Chinese Premier Li Keqiang.

Moon plans to present a vision for closer regional cooperation in efforts to create a "sustainable community" and to express Seoul's commitment to related contributions, Cheong Wa Dae said.

He will then be present at "special lunch on sustainable development" along with the leaders of the other participating nations, as well as U.N. Secretary-General Antonio Guterres and Kristalina Georgieva, managing director of the International Monetary Fund.

Moon will demonstrate Seoul's determination, as a responsible middle-power nation, to continue backing the global campaign to achieve the sustainable development goals (SDGs).

In the afternoon, the East Asia Summit will take place with the participation of all the ASEAN members, South Korea, Japan, China, the United States and Russia.

Moon is planning to introduce his government's position on the Korean Peninsula issue and other regional and global affairs.

Moon is expected to encounter Abe during the meetings.

But chances are slim that they will have formal one-on-one talks, Moon's aides said, amid a drawn-out standoff between the neighboring countries.