SEOUL, Nov. 2 (Yonhap) -- South Korea got another scoreless outing from its starting pitcher on Saturday, an encouraging development ahead of an Olympic baseball qualifying tournament.

Submarine pitcher Park Jong-hun worked three shutout innings against Puerto Rico in the teams' second tuneup game for the Premier12 tournament, which begins next week as the qualifying event for the 2020 Tokyo Olympics. South Korea went on to win 5-0, a day after enjoying a 4-0 win.

Park, starter for the SK Wyverns in the Korea Baseball Organization (KBO), gave up two hits while striking out one and walking one.

He faced the minimum through two innings. Osvaldo Martinez led off the game with a single but was erased on a double play by Jack Lopez. Anthony Garcia then popped out to shortstop. 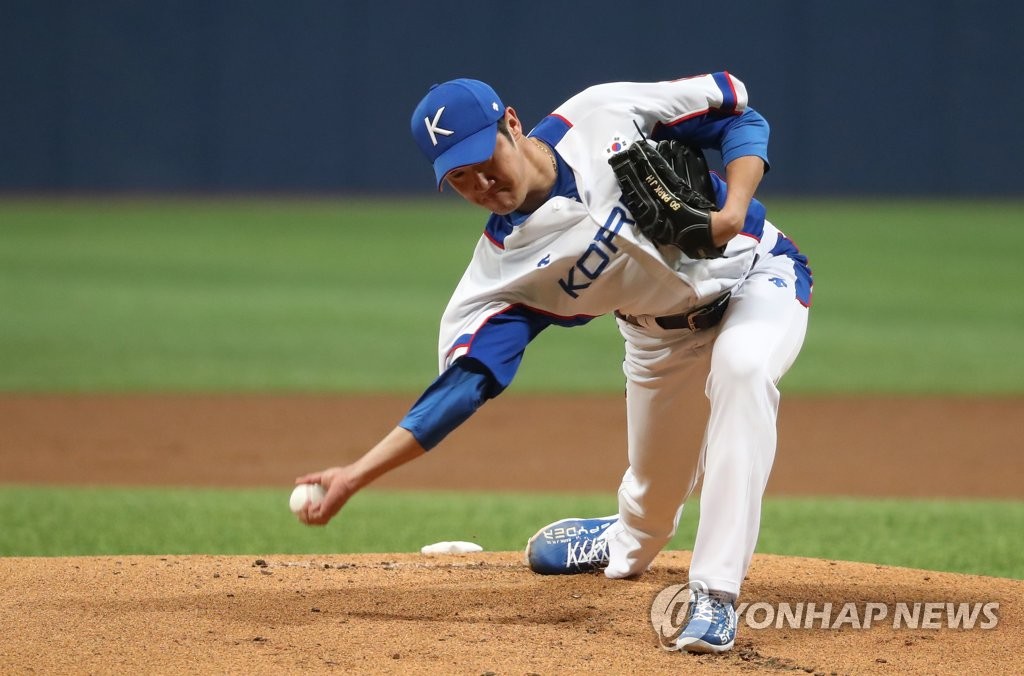 Park retired the side in order in the second with a groundout, a flyout and a popout.

In the third, Park pitched around a leadoff double and a walk to keep Puerto Rico off the board.

Yariel Gonzalez doubled down the right field line to begin the inning, and he moved to third on flyout. Kevin Torres then hit a hard groundball to third, and third baseman Choi Jeong made a nifty grab to throw out Torres while holding Gonzalez at the bag.

With his unusual delivery -- his right hand nearly touches the ground before he releases the ball -- Park will try to rely on his unfamiliarity factor against Premier12 opponents. He's expected to start one of three games at the Premier12 when South Korea hosts Australia, Canada and Cuba in Group C play from next Wednesday to Friday.

Park was followed by a parade of six relievers. Right-hander Moon Kyeong-chan pitched a scoreless fourth, erasing a leadoff single by Anthony Garcia with a double play groundball by Ivan De Jesus JR.

In the bottom fifth, left-hander Lee Seung-ho issued two straight walks with one out, before getting a groundout and a strikeout.

Left-hander Ham Deok-ju followed in the seventh, and he struck out two batters for a clean frame of his own.

Right-hander Lee Yong-chan struck out two in the eighth, and Cho Sang-woo pumped fastballs to strike out the side in the ninth, completing South Korea's second straight shutout win.