SEOUL, Nov. 4 (Yonhap) -- North Korea is believed to have striven to master capabilities to launch intercontinental ballistic missiles (ICBM) from transporter erector launcher (TEL) vehicles, and South Korea is fully prepared for all such possibilities, the defense ministry said Monday.

The comments came after Chung Eui-yong, chief of Cheong Wa Dae's National Security Office, came under fire from conservative critics for saying it is "technically difficult" for North Korea to fire ICBMs from mobile launchers.

Asked about the military's assessment, Col. Roh Jae-cheon, deputy spokesman of the defense ministry, told a regular briefing Monday that North Korea "in 2017 used TELs to transport its long-range missiles to the test sites and then fire them from a launch pad fixed on the ground."

"Two years have passed since then, and we believe that efforts have been made regarding such military technologies. We've been fully prepared for even a 0.001 percent chance," Roh said.

"Regardless of where such missiles are fired, we've been closely detecting and monitoring North Korea's related movements and maintained a perfect readiness posture in close coordination with the United States," he added.

The Hwasong-14 ICBM, with a range of around 10,000 kilometers, is capable of reaching most of the continental U.S., and its Hwasong-15 ICBM has an estimated range of over 12,000 kilometers so that it can reach anywhere on the U.S. mainland, according to U.S. Forces Korea.

The employment of TELs means the weapons secure a higher degree of mobility, according to experts. 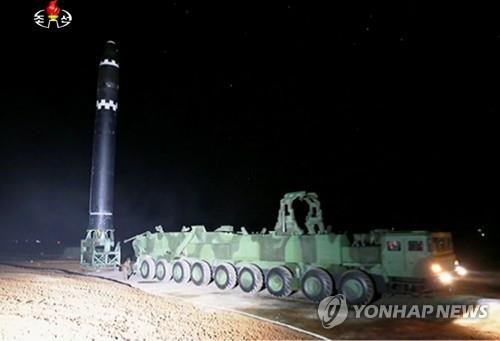