WASHINGTON, Nov. 4 (Yonhap) -- The White House on Monday honored the World Series champion Washington Nationals with a ceremony featuring a rendition of "Baby Shark," a children's song popularized by a South Korean company.

The catchy tune, which became the unofficial theme song of the baseball team, was played by the U.S. Marine Corps band on the South Lawn before the players arrived, followed by U.S. President Donald Trump and first lady Melania Trump.

The ceremony was held to honor Washington's first Major League Baseball champion since 1924.

"As you battled for every win, Gerardo Parra changed his walkup song to 'Baby Shark,'" Trump said in his congratulatory remarks, referring to the backup outfielder.

"That was a favorite of his 2-year-old daughter, and it became the anthem for the Nats fans everywhere," the president said. "And I tell you what, that turned out to be a very, very powerful little tune."

"Baby Shark" was released in 2015 by SmartStudy, a South Korean education entertainment startup. The rhythmic two-minute song introduces a family of sharks and their underwater hunt for small fish.

The video of the song's English language version comes with a matching dance choreography and a captivating refrain of "Doo doo doo doo doo doo."

In January, it made a surprise landing on Billboard's Hot 100 main singles chart to become the first non-pop Korean song to be listed. 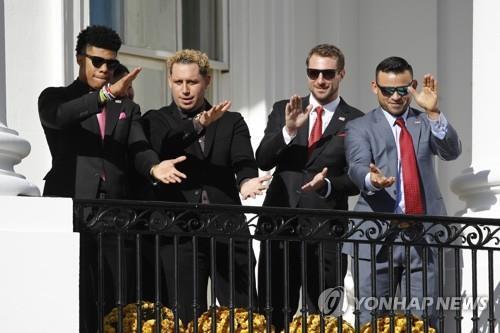