SEOUL, Nov. 5 (Yonhap) -- South Korea and the United States are not considering resuming their annual Vigilant Ace joint air exercise and will instead hold a scaled-back flying training together, officials said Tuesday.

The allies decided last year to suspend the massive Vigilant Ace drills in an effort to support diplomatic efforts to convince the communist nation to give up its nuclear programs. The sides instead held a replacement exercise, called the Combined Flying Training Event.

The Vigilant Ace maneuvers will be skipped this year too, with the two allies conducting the replacement flying exercise together just as they did last year, according to officials at the defense ministry and Air Force.

The two sides "are considering staging a combined exercise this winter to maintain a staunch defense posture but in an adjusted manner to replace Vigilant Ace," an Air Force officer said, adding that the allies have already outlined related plans.

The U.S. Defense Department said the replacement exercise will be staged as planned.

"There are no plans to skip upcoming combined exercises. We are proceeding with the Combined Flying Training Event as planned," Lt. Col. Dave Eastburn, a Pentagon spokesman, told Yonhap News Agency.

Launched in 2015 under the name of Pen-ORE (Peninsula Operational Readiness Exercise), Vigilant Ace, which mobilized a large fleet of aircraft from the allies, was held annually until 2017.

During the 2017 exercise, the allies mobilized around 270 aircraft, including radar-evading fighter jets, such as F-22s, F-35As and F-35Bs, in a show of force against North Korea, which had launched a series of nuclear and missile provocations.

Seoul and Washington have canceled several combined exercises since last year amid peace efforts involving North Korea to avoid provoking Pyongyang with maneuvers it has condemned as a rehearsal for a war of invasion.

Efforts to denuclearize the Korean Peninsula have been under way, though denuclearization negotiations between the U.S. and North Korea have not made much progress for months. 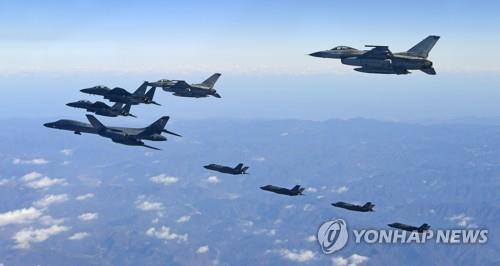