SEOUL, Nov. 5 (Yonhap) -- Despite a weak economy, the South Korean currency has soared against the greenback over the past month due mainly to optimism about U.S.-China trade talks, data showed Tuesday.

The local currency closed at 1,159.20 won against the U.S. dollar Monday, up 6.4 won from the previous session and as much as 37 won from the end of September.

Market watchers said the won's recent strength stems largely from the growing prospect of a trade deal between the world's two largest economies, not from economic fundamentals.

"Despite no improvement in South Korea's economic conditions and a gloomy outlook, the won has recently jumped against the greenback as it responded sensitively to the direction of U.S.-China trade talks," said Baek Suk-hyun, an analyst at Shinhan Bank.

A country's currency usually drops to the dollar should its economy stay weak, but the won's recent strength against the dollar bucks the trend.

Baek added the value of the local currency to the dollar is influenced greatly by Sino-American relations because South Korea depends heavily on trade for its economic growth. 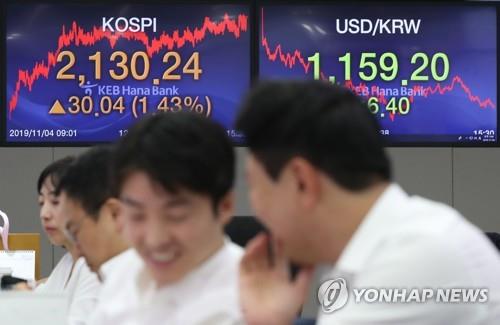 Indeed, the South Korean currency tumbled to 1,222.2 won to the dollar on Aug. 13 after Washington designated Beijing as a currency manipulator and said it would slap additional tariffs on Chinese goods.

The won then swung to an uptrend on news of high-level trade negotiations between the top two economic powers and began to rise sharply following their small trade deal on Oct. 11.

A trade war usually leads to a decline in global trade volume, which hurts South Korea greatly because of its high dependence on exports.

South Korea did take a hit from the Sino-American trade standoff as Beijing imports many intermediate goods from Seoul for exports to the U.S. In the first half of this year alone, U.S. imports from China sank 12.3 percent on-year.

Baek predicted the Korean currency to gather further ground against the dollar down the road, given eased tensions between Washington and Beijing.

The won's recent appreciation comes as the South Korean economy remains in the doldrums due to slackening exports and stubbornly weak domestic demand.

The South Korean economy, Asia's fourth-largest, grew 0.4 percent in the third quarter of the year from three months earlier, a slowdown from a 1 percent on-quarter expansion in the April-June period.

The country's exports sank 14.7 percent in October from a year earlier, extending their slump to an 11th consecutive month.

The local currency did fall to the greenback in August when poor economic data was unveiled. The Korean monetary unit dropped by as much as 9.6 won to the dollar on April 25 alone, when the Bank of Korea announced the economy shrank 0.4 percent in the first quarter of this year from three months earlier.
(END)