The Seoul Foundation for Arts and Culture (SFAC), a nonprofit public organization established by the Seoul metropolitan government, said its first online "pansori" featuring Korean classical music, literature and visual arts will be unveiled on YouTube on Friday.

Pansori is a genre of musical storytelling performed by a vocalist and a drummer.

The first episode of pansori on the web, titled "Dalmun: A man of infinite goodness," will be disclosed on the foundation's YouTube channel, SFAC TV, at 3 p.m. Friday.

Thereafter, a new episode will be unveiled every Friday in November. 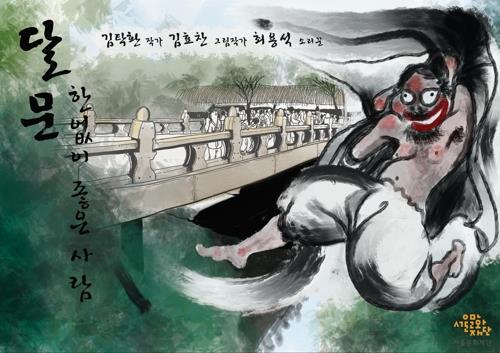 The first episode depicts the life of Dalmun, the main character of a history novel published by Kim Tak-hwan last year, by means of pansori and imaging techniques. In the novel, Dalmun is a Joseon Dynasty (1392-1910) clown and joker who entertains ordinary people with satire and talent around Seoul.

The pansori-based content has been created through a five-month collaboration among Kim, vocalist Choi Yong-seok, picture artist Kim Hyo-chan and other artists.

Kim's novel was first reproduced into pansori and character images suitable for YouTube were added later to produce a video. It also features Korean traditional mask and sword dance performances, and its background music was played by traditional music group Gong Myoung.

"A new form of cultural content has been created through a collaboration among existing genres," an SFAC official said. "We wish the online distribution of pansori performances will help promote Korean culture abroad."

First online 'pansori' work to debut on YouTube this week

First online 'pansori' work to debut on YouTube this week