But South Korean manager Kim Kyung-moon said Tuesday he doesn't think it'll be as easy to score once the real tournament begins.

South Korea will begin its Group C action at The Premier12, which doubles as an Olympic qualifying event for the Americas and the Asia/Oceania region, on Wednesday against Australia. Canada and Cuba are the other teams in the group, and all games will be played at Gocheok Sky Dome in Seoul. 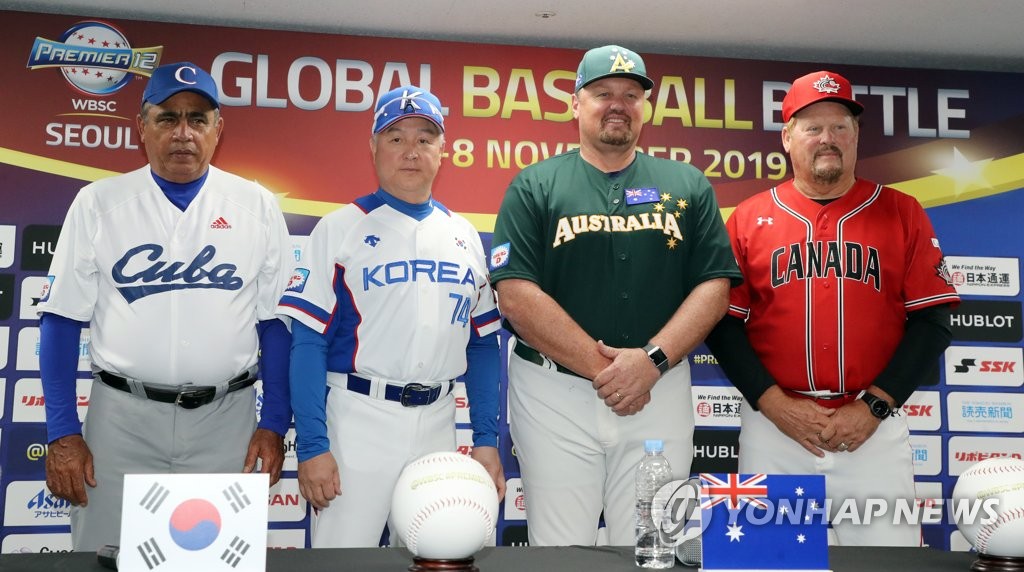 South Korea is the defending Premier12 champion from 2015, and also the last Olympic champion in baseball from 2008. The sport wasn't contested at the Olympics in 2012 and 2016, but made its way back to the quadrennial event for next year in Tokyo.

Asked to comment on how he felt the opening game would play out, Kim said he doesn't foresee a high-scoring affair.

"I don't think there will be a lot of runs on the board early on," Kim said at the pre-tournament press conference. "I think the pitchers will be sharp for both teams, and hitters will have to capitalize on their opportunities."

"No matter which event we play, we always have the confidence that we can match anybody in the world in teamwork," Kim said. "We'll build on that foundation and try to have an exciting tournament for our fans."

Kim had been stressing the importance of winning the first game of the tournament. But with that first game just around the corner, Kim said he wanted his players to breathe a bit easy.

"The players know the importance of the first game, but I want them to be more relaxed and composed now," he said. "If we can just stick to our game plan and do what we're supposed to do, then good results will follow."

Australian skipper Dave Nilsson said he's excited to be going up against the tournament's defending champion to start things off, adding, "We wouldn't want it any other way. I have a huge amount of respect for Team Korea."

"It's difficult to predict how it's going to go," the former All-Star for the Milwaukee Brewers said. "All we're concerned about is we score one more run than Team Korea."

Nilsson, who won the 2004 Olympic silver with Australia as a player, said he likes the veteran savvy of his squad.

"I've chosen a group of athletes that have a lot of international experience and tournament experience," he said. "We're very well rounded and we have solid pitching."

Before South Korea and Australia square off in the official Group C opener at 7 p.m. Wednesday, Canada and Cuba will collide at noon.

Cuban manager Miguel Borroto said he's brought a youthful team that can compete with a lot of energy.

"I think we're a fundamentally sound team, and we have a good balance between our pitching, fielding and hitting," he said. "We can play a fast and dynamic style of baseball. We have some lively arms on our pitching staff."

The Premier12 features the top-12 teams by the WBSC rankings, divided into three groups of four. South Korea is the top-ranked team in Group C at No. 3, followed by Cuba (No. 5), Australia (No. 7) and Canada (No. 10). The top two teams from each group will qualify for the Super Round, which will be played in Japan next week.

To qualify for Tokyo 2020, South Korea must reach the Super Round and also finish ahead of its Asia/Oceania rivals, Australia and Chinese Taipei.