Assistant Secretary of State David Stilwell made the remarks after paying courtesy calls on Foreign Minister Kang Kyung-wha and Vice Foreign Minister Cho Sei-young during his trip here seen as an effort to help defuse tensions over trade and history between Washington's two Asian allies.

"Very encouraged while we were there to note that President Moon and Prime Minister Abe had the opportunity to talk and that's an encouraging sign as we watched the relationship improve," Stilwell told reporters. 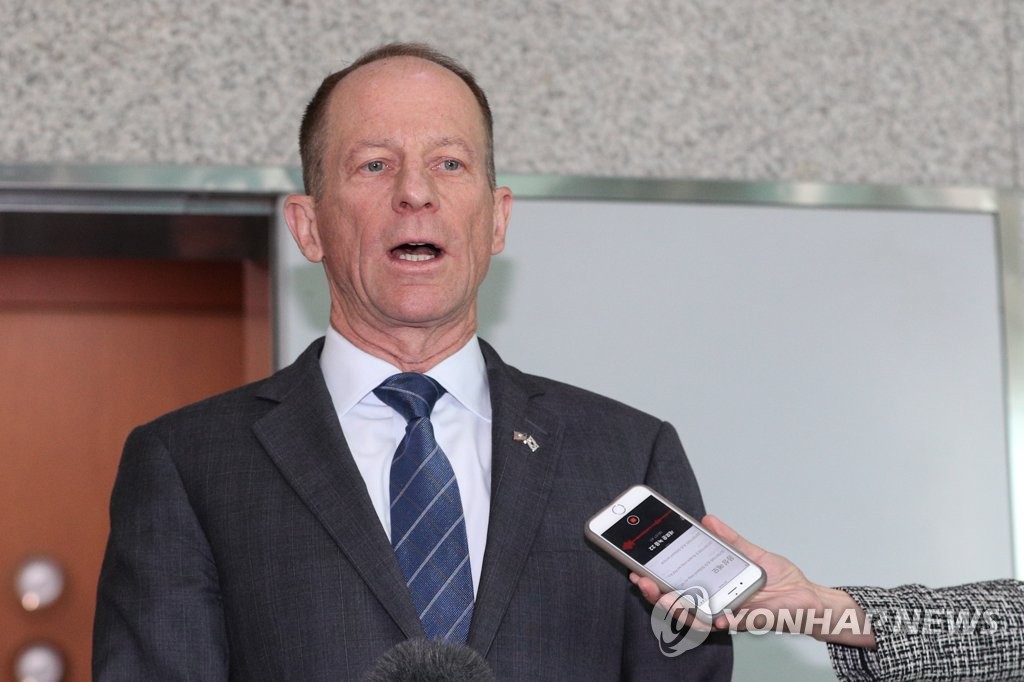 Moon and Abe had an 11-minute conversation on the sidelines of multilateral summits involving the Association of Southeast Asian Nations (ASEAN) in Bangkok on Monday, raising hope for a thaw in the chilled bilateral ties.

Stilwell also called the South Korea-U.S. alliance the "linchpin" of peace and security in the Indo-Pacific region.

He arrived here late Tuesday as part of his Asia trip, amid a U.S. effort to forestall the looming expiration of the General Security of Military Information Agreement (GSOMIA), seen as a symbolic tool to foster America's trilateral security cooperation with its Asian allies.

GSOMIA is set to expire Nov. 23 unless Seoul reverses the decision, which was announced in August after Tokyo implemented new export curbs seen as political retaliation for last year's Korean Supreme Court rulings against Japanese firms over wartime forced labor.

Washington has recently been seen as heaping pressure on Seoul to revoke the decision, underscoring the importance of the U.S.' three-way security cooperation with South Korea and Japan.

During his courtesy call, Minister Kang explained Seoul's efforts to explore a "reasonable" solution to the dispute with Tokyo, while the U.S. officials cast these efforts as "encouraging," her ministry said in a press release.

"The two sides shared the understanding that close communication and cooperation at each level is vital in handing various pending issues between the allies and agreed to strengthen related efforts," the ministry said.

Sitting next to Stilwell was Keith Krach, under secretary for economic growth, energy and environment, who was here to attend the allies' Senior Economic Dialogue.

The two U.S. officials agreed to work together with Seoul to enhance regional peace and prosperity based on cooperation principles of openness, inclusiveness and transparency, the ministry said.

Stilwell said in turn: "In fact, we came to the same conclusions almost independently. It says a lot about the alliance's worldviews as well."

Seoul and Washington released the document after Stilwell and his South Korean counterpart, Yoon Soon-gu, held talks on the margins of multilateral summits in Bangkok on Saturday.

In the press availability later, the U.S. diplomat also touched on the document.

"We managed to further strengthen that (relationship) in our interactions in Bangkok at the East Asia Summit where we released a document that identifies areas where the Indo-Pacific Strategy and the New Southern Policy overlap," he said.

Kim had "specific, constructive and forward-looking" consultations with Stilwell on alliance issues, such as GSOMIA, said Ko Min-jung, spokeswoman of the presidential office Cheong Wa Dae. Their talks lasted for some 70 minutes, she said.

Upon arrival at the defense ministry, Stilwell said that he had "fantastic discussions" with Seoul officials, though it was not clear what agenda items topped the discussions.

It remains unknown whether Stilwell used his visit to Seoul to make any explicit call for Seoul to reconsider its decision on GSOMIA.

His visit to Seoul coincided with trips here by other senior State Department officials who came here to attend the Senior Economic Dialogue or the South Korea-U.S. joint public-private economic forum, or for other purposes.

Among them are Marc Knapper, deputy assistant secretary for Korea and Japan; and James DeHart, the top negotiator in defense cost-sharing negotiations with South Korea.

During their stay, the U.S. officials are expected to step up efforts to fend off the GSOMIA termination and encourage Seoul to more actively explore ways to find common ground between the allies' regional policy initiatives.

Stilwell is in Seoul as part of his Asia trip that has included stops in Japan, Myanmar, Malaysia and Thailand. He will travel to Beijing on Thursday. 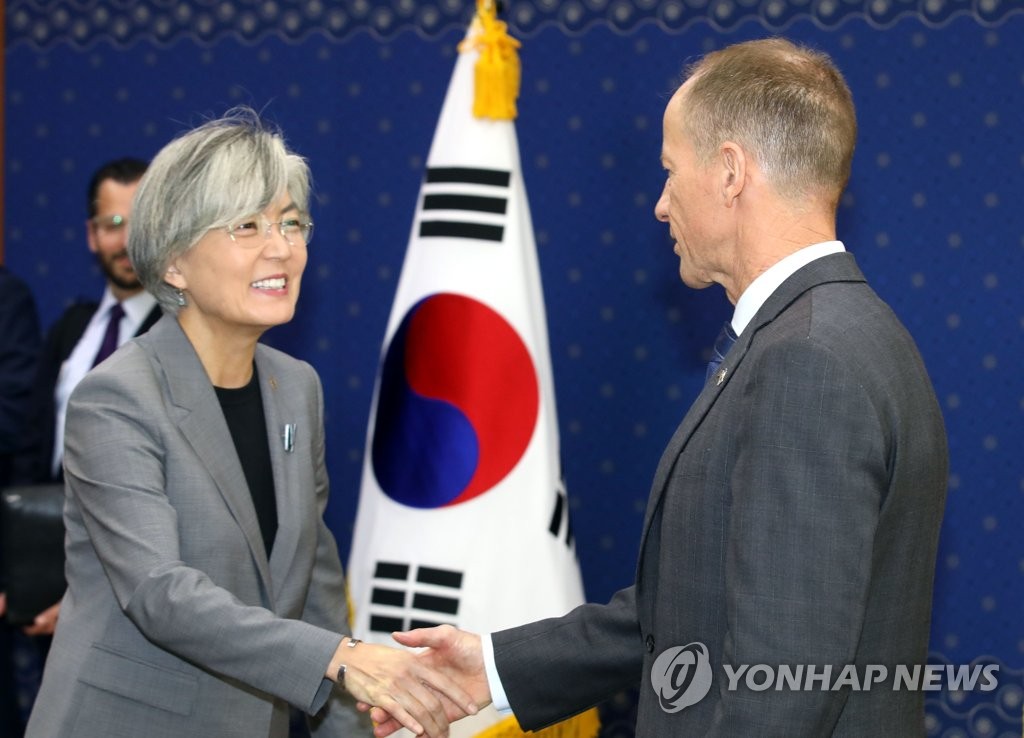