SEOUL, Nov. 6 (Yonhap) -- The top American diplomat for East Asia said Wednesday that he had "fantastic discussions" with South Korean officials amid speculation that the meetings likely were focused on a soon-to-expire military-information-sharing pact between Seoul and Tokyo.

Assistant Secretary of State David Stilwell made the remark upon arrival at the defense ministry when a reporter asked if he had discussed the General Security of Military Information Agreement (GSOMIA) during the meetings with Foreign Minister Kang Kyung-wha and Vice Foreign Minister Cho Se-young earlier in the day.

"We had fantastic discussions today and on topics of agreements, especially after the event this week in Bangkok at the EAS, so very positive," Stilwell said, referring to the East Asia Summit earlier this week.

On the sidelines of the EAS, South Korean President Moon Jae-in and Japanese Prime Minister Shinzo Abe held a brief one-on-one meeting. Earlier in the day, Stilwell told reporters that the meeting between Moon and Abe was an "encouraging" sign in fence-mending efforts between Seoul and Tokyo.

GSOMIA is to expire on Nov. 23, as South Korea in August announced the decision to terminate the intelligence-sharing pact in response to Japan's new export curbs seen as political retaliation for last year's Korean Supreme Court rulings that ordered Japanese firms to compensate victims of wartime forced labor.

It is not immediately known if the issue was on the table during his talks with Deputy Defense Minister Chung Suk-hwan.

Issuing a statement, the defense ministry said that the two sides shared their assessment on the security situation on the Korean Peninsula and discussed ways to cooperate further for the development of the Korea-U.S. alliance.

"As a chance to further strengthen communications ... this meeting is expected to contribute to diplomatic efforts for the denuclearization of the Korean Peninsula and the establishment of a lasting peace," the ministry said, adding that the two sides pledged continued coordination with each other.

Stilwell is in Seoul as part of his Asia trip that has included stops in Japan, Myanmar, Malaysia and Thailand. He will travel to Beijing on Thursday. 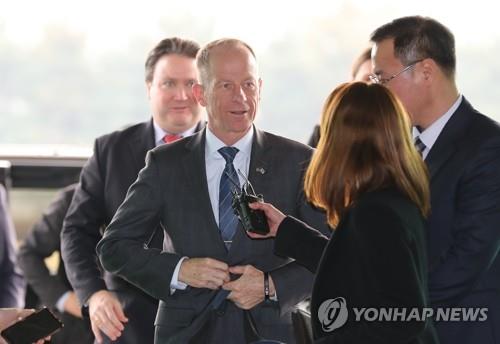