(ATTN: UPDATES with arrival at Gimpo airport in paras 1, 4)

SEOUL, Nov. 6 (Yonhap) -- The fuselage of an ambulance chopper that crashed into the East Sea six days ago was shipped to Gimpo International Airport in Seoul for an in-depth investigation into the cause of the accident, government officials said Wednesday.

The ill-fated ambulance helicopter, owned by the National 119 Rescue Headquarters, was carrying seven people, including an injured person, when it crashed into the East Sea on Thursday night shortly after taking off from the easternmost islets of Dokdo. The rescue chopper was on a mission to save the patient from a fishing boat.

The destroyed fuselage was retrieved from the crash site on Sunday, while three bodies have so far been found inside the chopper and near the crash site. 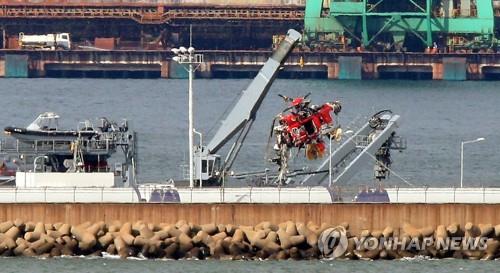 According to the officials at the Ministry of Land, Infrastructure and Transport, a cargo truck carrying the fuselage, which was taken to the southeastern port of Pohang, 375 kilometers from Seoul, after its retrieval, arrived at a flight recorder analysis and wreckage laboratory located at Gimpo International Airport in western Seoul shortly after 5 p.m.

The laboratory plans to carry out a detailed analysis on the cause of the crash, they added.