(ATTN: UPDATES with meeting with Moon in paras 12-15, photo)
By Lee Minji

SEOUL, Nov. 7 (Yonhap) -- Leaders of key news agencies in the Asia-Pacific region opened a two-day conference in Seoul on Thursday to discuss ways to cope with changing media landscapes and promote mutual exchanges and partnerships.

This year, participants will take part in three panel sessions under the theme "New Challenges for Journalism: Technological Innovations and Issues of Trust" to discuss how technological developments and issues such as fake news and misinformation will impact journalism.

"News agencies around the globe face unprecedented challenges that they must turn into new opportunities. Artificial intelligence, virtual reality and machine learning have entered our newsrooms as technology makes advancements in leaps," Yonhap News CEO Cho Sung-boo said in his opening remarks.

"We have to constantly create new contents in new forms. The question is not just what news we distribute but how we distribute it. The difficulty is that all these tasks must be done simultaneously, and with speed," Cho said. 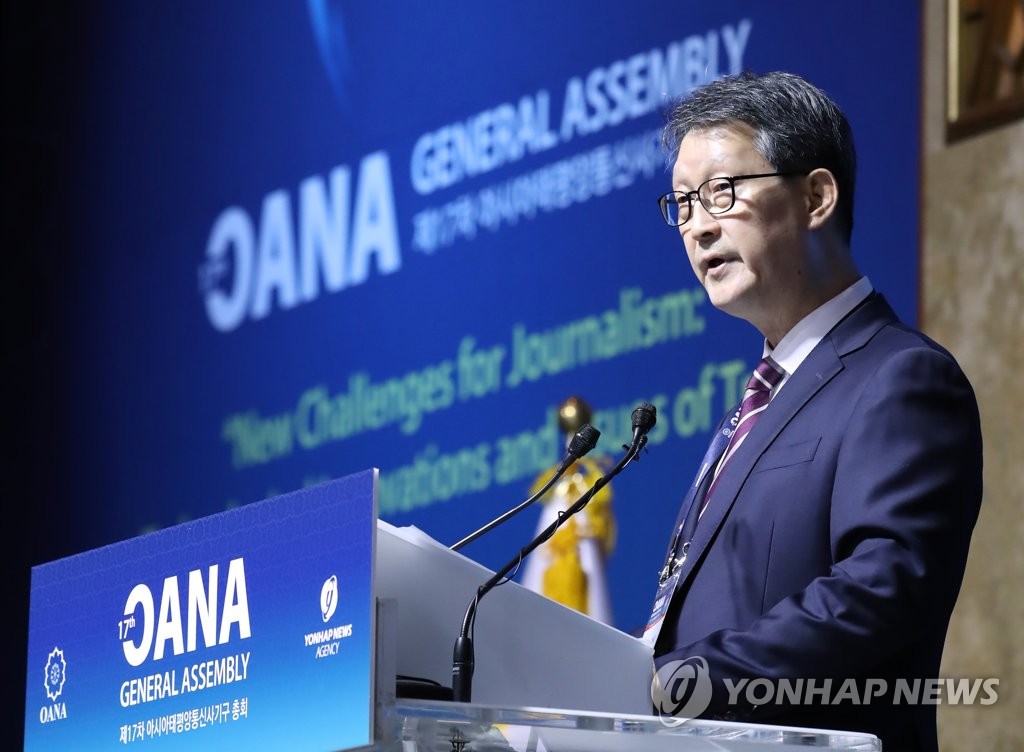 "At a time when streams of information flow quickly along a variety of channels, the mission of news agencies is becoming increasingly complicated. The opportunities generated by social networks and mobile technologies are open not just to us but to everyone else. This leads to a rapid increase in the number of news channels, which cannot but affect us," said OANA President Aslan Aslanov, who also doubles as Chairman of the Board at AZERTAC, Azerbaijan's state news agency. 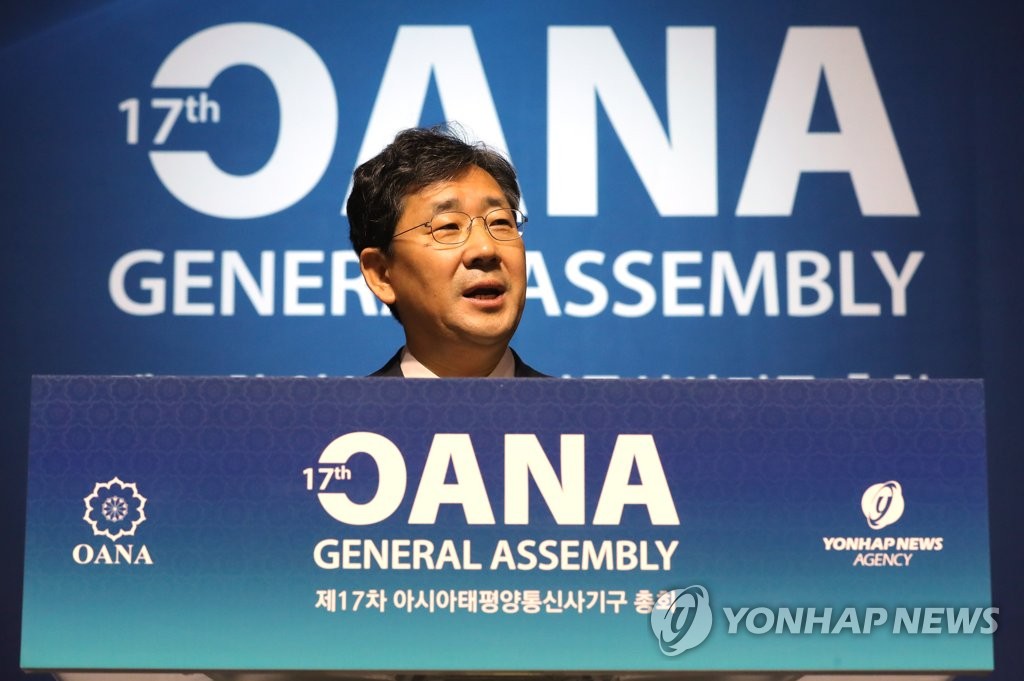 "Striving for fair and factual reporting, the mission of journalism, and earning public trust are noble pursuits for the global community to march forward in a healthy and harmonious way, regardless of the country or society," Minister of Culture, Sports and Tourism Park Yang-woo said.

"I hope that the OANA General Assembly in Seoul will be an opportunity to pool our wisdom together for discourse on not only reaffirming the role of the responsible press in the new media environment but also on ways to overcome indiscriminately distorted information," Park said. 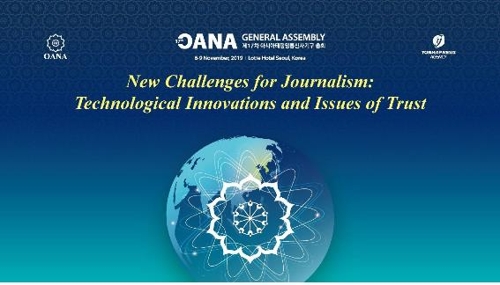 During the morning session, participants discussed developments in 5G mobile technology and their impact on journalism as well as the overall media industry, encompassing games and other forms of content.

The delegates met President Moon Jae-in at Cheong Wa Dae in the afternoon.

Moon asked member companies for their continued attention and support for the Korea peace process.

"Peace on the Korean Peninsula is a starting point for achieving a peace community of co-prosperity," he said.

"There are still many hurdles to overcome, but (peace) is the way (we) must go," Moon said. "I believe your attention and support will be of big help." 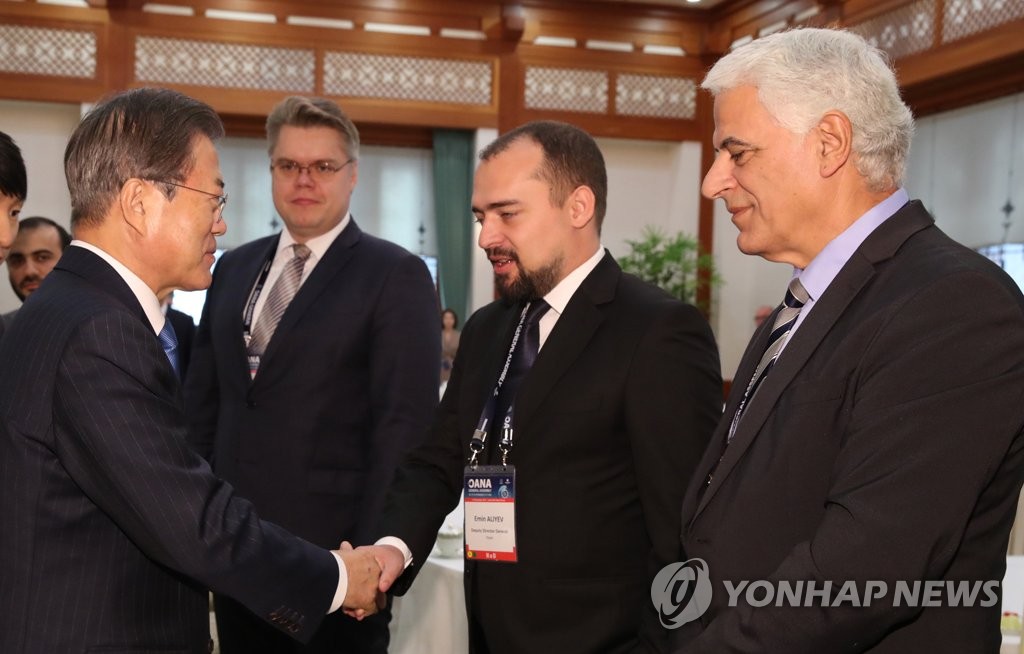 Yonhap is set to be formally elected as the new chair of OANA at the assembly and to lead the organization for the next three years, also serving as its secretariat to prepare the agenda of various OANA meetings, deliver notices to member companies and operate the OANA website.

It will be Yonhap's first time chairing OANA since joining the regional organization more than 30 years ago, a move which apparently reflects the status of the South Korean news wire in the global media community.

Yonhap has inked news exchange partnerships with 89 news agencies in 77 countries around the world. It operates bureaus in 25 countries and runs multilingual news services in six languages, including English, Chinese, Japanese and Arabic.