The maneuvers will be smaller in scale than the massive Vigilant Ace exercise that the allies had conducted annually before suspending it last year as part of efforts to support diplomatic efforts to convince North Korea to denuclearize, the sources said.

"The South and the U.S. plan to hold a combined air exercise with an adjusted scale around the middle of this month," a source said on condition of anonymity. "Its size will be adjusted from the large-scale Vigilant Ace exercise."

Earlier this week, the defense ministry said the two countries plan to hold a joint exercise this winter as a replacement of the Vigilant Ace drills that used to take place in December. But further details were not available, including its timing.

In response, North Korea on Wednesday issued a statement and warned that its patience is "reaching its limits" and it "will just not sit idle while just watching the U.S.' reckless military movements."

Following North Korea's complaints about the combined exercise, Lt. Col. Dave Eastburn, a Pentagon spokesman, said on Wednesday, "We don't scale or conduct our exercises based off North Korea's anger."

South Korea's Defense Minister Jeong Kyeong-doo also stated earlier this week that Seoul and Washington "are planning to stage (the exercise) in an adjusted manner in consideration of all circumstances," which aims to secure "actual capabilities."

"The militaries of the two countries have continuously done combined exercises to maintain a strong readiness posture, and the envisioned air exercise will be carried out in that sense," another Seoul military source said, noting that the authorities have no plan to make an official announcement regarding the upcoming drill as a matter of policy.

Seoul and Washington have canceled several combined exercises since last year to facilitate peace efforts involving North Korea to avoid provoking Pyongyang with maneuvers it has condemned as a rehearsal for a war of invasion.

Launched in 2015 under the name of Pen-ORE (Peninsula Operational Readiness Exercise), Vigilant Ace, which mobilized a large fleet of aircraft from the allies, was held annually until 2017.

During the 2017 exercise, the allies mobilized around 270 aircraft, including radar-evading fighter jets, such as F-22s, F-35As and F-35Bs, in a show of force against North Korea, which had launched a series of nuclear and missile provocations. 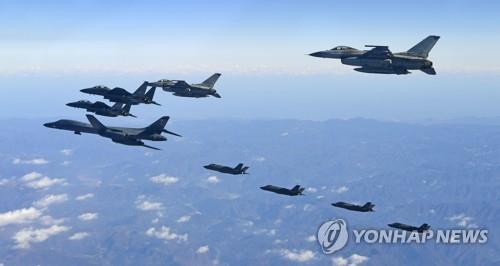