On Thursday, the Aekyung-Stone Bridge Capital consortium, the consortium of Hyundai Development Co. (HDC) and Mirae Asset Daewoo, and the consortium of the Korea Corporate Governance Improvement (KCGI) and BankerStreet private equity funds submitted their final bids to Credit Suisse, the sole lead manager of the deal. 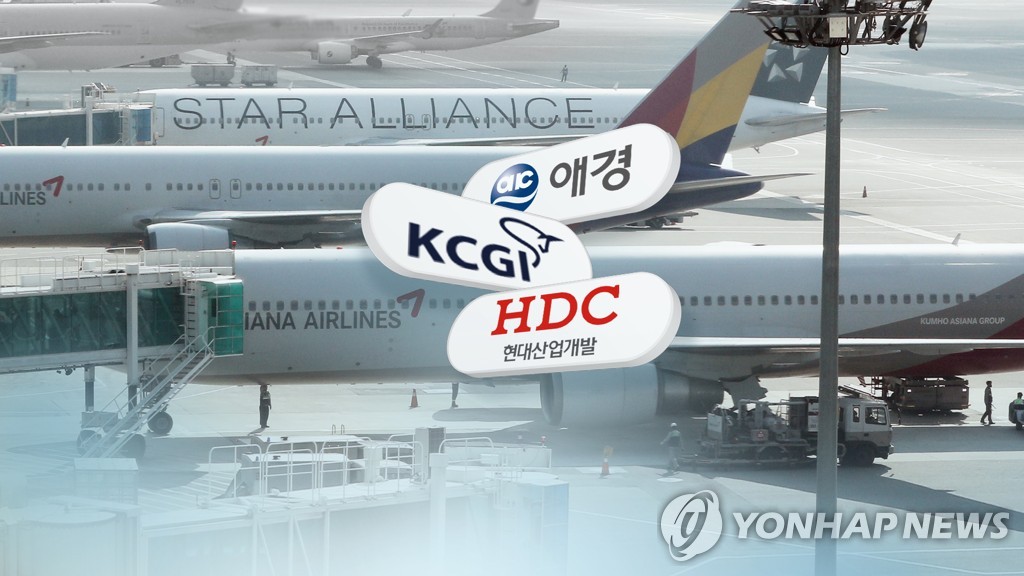 Aekyung and HDC reportedly presented the acquisition prices of around 1.5 trillion won (US$1.3 billion) and about 2.5 trillion won, respectively, for the country's second-biggest airline after Korean Air Lines Co.

"News reports that HDC has submitted a price that is far higher than Aekyung's appear to have helped drive up Asiana's and its affiliate's stock prices," Mirae Asset Daewoo analyst Park Hee-chul said over the phone.

Among the bidders, Aekyung Group has been the most aggressive, stressing it is the only strategic investor that has 13 years of experience and know-how in operating an airline.

The cosmetics-to-airline conglomerate said there is no precedent in which a company that does not have experience of operating an airline has succeeded in airline acquisition. As it has Jeju Air Co., the country's biggest low-cost carrier, under its wing, its acquisition of Asiana Airlines is in line with global M&A trends.

Kumho Asiana Group, the parent of Asiana Airlines, aims to sell the stake in the airline held by its subsidiary, Kumho Industrial Co., together with its six affiliates as part of its broad restructuring efforts.

The six affiliates include two budget carriers -- Air Seoul Inc., which is wholly owned by Asiana Airlines, and Air Busan, which is 46 percent owned by the airline.

The 31 percent stake was valued at 365 billion won (US$400 million) at Friday's closing price of 5,820 won. But analysts have estimated the deal could fetch up to 2 trillion won when the management premium and the value of new shares to be issued are taken into account.

Kumho Asiana plans to select a preferred bidder within a week, with an aim to complete the sale of the airline unit this year.

In the January-June period, the airline's net losses widened to 292 billion won from 43 billion won a year earlier due to the won's weakness against the dollar. A weak won not only drives up the value of dollar-denominated debts when converted into the local currency but also increases purchasing costs.

It is scheduled to release its January-September earnings results on Nov. 14.