SEOUL, Nov. 10 (Yonhap) -- South Korea's telecom players and cable TV network operators are set to join forces to retain and attract more customers in the face of toughening competition with global content providers, gearing up for a major shift in the local media market.

The process of mergers and acquisitions (M&As) between telecom and cable network operators is gaining steam after the nation's corporate watchdog on Friday approved deals by two mobile carriers -- SK Telecom Co. and LG Uplus Corp. -- after a monthslong review process, removing one of the last remaining regulatory hurdles.

FTC chief Joh Sung-wook said the antitrust agency approved the M&As in consideration of the "systemic change" in the pay TV market and the rise of digital platforms.

"The pay TV market has shifted toward digital content in line with an increasing number of IPTV (Internet Protocol television) subscribers and video-on-demand content on digital platforms," Cho told reporters. "(The FTC) approved the deals to spur convergence between broadcasting and telecommunication and respond to the changing media ecosystem in the face of toughening global competition." 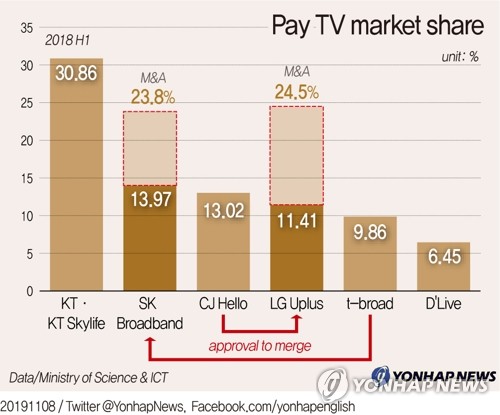 With the FTC's approval, the deals will need to be reviewed by the Ministry of Science and ICT, and SK Broadband's merger will also require final screening by the Korea Communications Commission.

If the M&As take place as planned, SK Broadband and LG Uplus are each expected to hold about a quarter of the nation's pay TV market, closing the gap with industry leader KT Corp., which accounts for 31 percent.

Industry watchers say M&A activities in the industry are inevitable amid the intensifying need for telcos and media companies to rebalance their business portfolios to make the most of future growth opportunities and respond to the rapidly changing business environment.

Although traditional TV still attracts the most viewing and advertising, global streaming giants such as Netflix and Youtube have been expanding their clout in Asia's fourth-largest economy, adding to the pressure on traditional media models.

According to data by app analysis company Wiseapp, the number of Netflix users in South Korea nearly tripled from 630,000 in June 2018 to 1.6 million in June this year.

In the face of intensifying competition with the over-the-top (OTT) models, market watchers say local companies should focus on new business models to succeed and create their own content as media consumption and production systems change.

As part of efforts to scale up, SK Telecom in September launched an integrated OTT platform with the nation's three terrestrial broadcasters to take on global media giants.

The new OTT platform, Wavve, had attracted 1.4 million paid subscribers as of October, the company said, noting it aims to have 5 million users and annual sales of 500 billion won by 2023 by offering original content in collaboration with other partners.

LG Uplus also vowed to create synergy in its mobile network and media business via the M&A deal with CJ Hello to tap into the global media and entertainment market.

"LG Uplus is expected to expand its presence on the back of a merger with CJ Hello, which could create synergy in its 5G mobile network business," said Lee Hak-moo, an analyst at Mirae Asset Daewoo Securities.

In response to the raft of M&As, KT said it will improve its own IPTV service with artificial intelligence (AI) and virtual reality (VR) technologies to strengthen its position in the local pay TV market.

KT has shown interest in buying a local cable network but has faced regulatory setbacks due to its high market presence in the pay TV market.

"While our competitors are focusing on M&As in the saturated pay TV market, KT is trying to find new opportunities with personalized IPTV services to cater to a growing number of single-person households," Koo Hyun-mo, head of KT's customer and media division, said during a press briefing on Monday.

To defend its business against OTT platforms, KT said it will also explore ways to create its own content through partnerships, signaling a change in its traditional media business model.

"If KT's media business merely distributed content in the past, we will rev up the competitiveness of the IPTV platform and create original content to tap into the global market," Koo said.