SEOUL, Nov. 9 (Yonhap) -- President Moon Jae-in visited the southeastern city of Yangsan to tend to the grave of his mother who passed away late last month, his office said Saturday.

Moon flew to Yangsan, South Gyeongsang Province, on Friday, after wrapping up a meeting of the Anti-Corruption Policy Consultative Council for Fair Society, according to Cheong Wa Dae.

He is expected to return to Seoul later in the day.

Moon's mother, Kang Han-ok, died on Oct. 29 at the age of 92 from chronic illness and was laid to rest at a burial site in the city where her husband is also buried.

Traditionally, South Koreans hold a memorial ceremony on the third day after a funeral. But Moon failed to attend the service for his mother while preparing for a scheduled trip to Thailand to attend annual regional summits driven by the Association of Southeast Asian Nations (ASEAN).

Yangsan is where Kang resided. President Moon was born on the nearby island of Geoje and spent most of his early days in the port city of Busan. 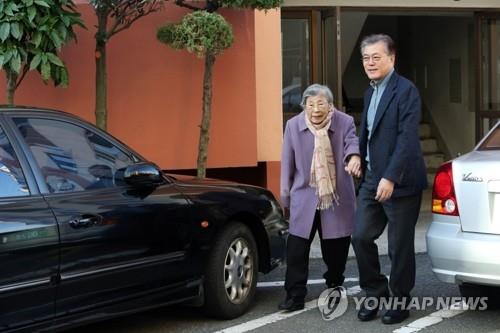