The team led by You Nam-ho, an advanced composite materials expert, used heat to melt and fuse sulfur, a petroleum refining byproduct, to successfully produce sulfur-doped graphene, according to the Korea Institute of Science and Technology (KIST). This process did not require additional chemical agents or organic solvents that could complicate production and raise costs.

Graphene, often referred to as the wonder material of the future, is a layer of carbon atoms in a hexagonal lattice just one atom thick. It is hundreds of times stronger than steel, very good at conducting heat and electricity, and shows various useful absorption qualities. These characteristics give it almost limitless industrial potential if it can be affordably mass produced.

"The graphene made through this method has been tested to effectively filter out heavy metals like mercury, and can be applied in electronics, energy storage batteries and in the making of cars and even airplanes," the institute said.

KIST said that compared to similar materials developed in the past, the newly produced graphene is 94 percent better at filtering and absorbing mercury, has 150 percent higher tensile strength and possesses excellent electrical conductivity.

"The latest research by the scientists from KIST and other local universities comes at a time when waste sulfur is posing environmental problems to countries like South Korea, which is trying to safely dispose of the material," the Seoul-based technology institute said.

Sulfur mixed with water and air leads to acid rain, which corrodes buildings and is one of the main causes of deforestation and the acidification of waterways, which in turn poses a danger to aquatic life.

You said that the latest breakthrough is noteworthy because it puts the unique qualities of sulfur to good use.

"Once more progress is made on the production process, the advances made in the research can have a considerable impact in various industries going forward," he said.

KIST said that the research, which received support from the science ministry, has been published in the latest issue of the international Composites Part B: Engineering journal under title "Sustainable production of reduced graphene oxide using elemental sulfur for multifunctional composites." 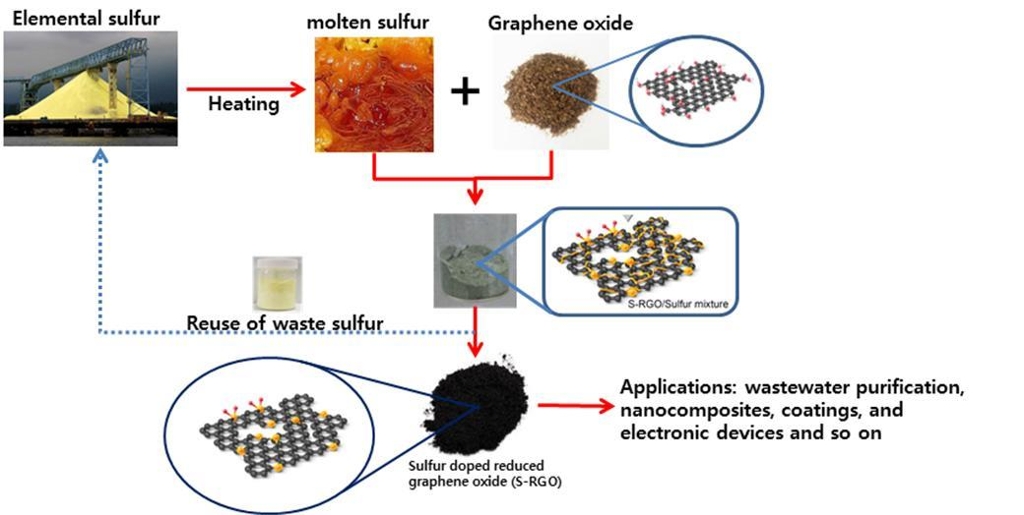