SEOUL, Nov. 10 (Yonhap) -- South Korea can reconsider its decision to terminate a military information-sharing accord with Japan if bilateral relations are normalized, a top Cheong Wa Dae official said Sunday.

At a press conference held on the occasion of the halfway point of President Moon Jae-in's five-year term. Chung Eui-yong, head of the national security office, said Japan is South Korea's partner for peace and security in Northeast Asia.

He was responding to a question about whether Cheong Wa Dae can exert some flexibility on the issue of the General Security of Military Information Agreement (GSOMIA) in consideration of recent developments in Seoul-Tokyo relations. 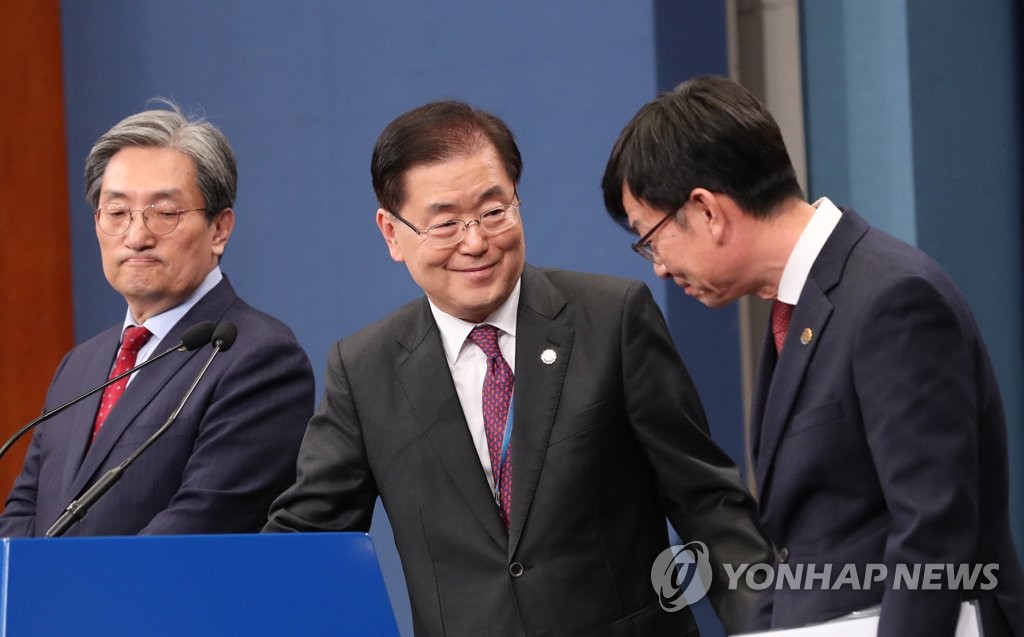 On Aug. 22, the Moon administration announced a decision not to extend the agreement, signed in 2016, after Tokyo removed Seoul from the "whitelist" of trusted trade partners in apparent retaliation over issues related to their shared history.

The hard-won GSOMIA is slated to expire on Nov. 23, and the United States has pressed South Korea to retain the accord, regarding it as crucial in trilateral security cooperation in the region.

In a potential breakthrough in the prolonged Seoul-Tokyo standoff, President Moon Jae-in had an 11-minute formal face-to-face dialogue with Japanese Prime Minister Shinzo Abe in Bangkok last week on the sidelines of an ASEAN-hosted annual summit.

Moon described it as a "meaningful meeting" that may lead to additional talks between the two sides.

"If South Korea-Japan relations are normalized, our government has the intention of considering the extension of GSOMIA again," Chung said. Seoul has repeatedly delivered the position to Japan, he added.

Chung pointed out that Japan is to blame "fundamentally" for the recent troubles in the bilateral relationship with its export curbs.

Even if GSOMIA expires, the exchange of military information with Japan won't be severed completely, and there would be "limited impact" on South Korea's national security, Chung said.

He was apparently referring to indirect exchange through Washington.

The fate of GSOMIA is a one-on-one issue between the neighboring countries and is not connected with the Seoul-Washington alliance, he added.

He noted, however, that South Korea is well aware of the importance of Seoul-Tokyo relations as partners to cooperate for regional security and peace.