SEOUL, Nov. 11 (Yonhap) -- South Korean investors are shifting their money into stocks out of safer bonds as risk appetite perks up on eased concerns over the U.S.-China trade spat, data showed Monday.

Funds reserved for local stocks registered a net inflow of slightly over 320 billion won (US$276 million) in the one-month period to Thursday, raising their combined assets to 53.8 trillion won, according to the data from financial market tracker FnGuide.

The tally marks a turnaround from stock funds' performance this year. So far this year, those equity funds have recorded a net outflow of 1.03 trillion won.

Market watchers attributed the recent net inflow largely to expectations for progress in the U.S.-China talks to end their tit-for-tat tariff war, which prompted investors to seek riskier assets.

"The global asset market is on risk-on mode on expectations for a phaseout of tariffs by Washington and Beijing," Im Dong-min, an analyst at Kyobo Securities, said. 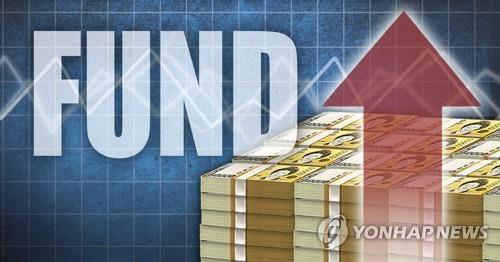 South Korea's stock market has been on a steady rise in recent months thanks to eased external uncertainties.

The benchmark Korea Composite Stock Price Index has recently breached the 2,100-point level after languishing below the psychologically important 2,000 mark in early August.

In contrast, domestic bonds funds have suffered a net outflow of 915 billion won over the cited period, with their total assets amounting to 32.7 trillion won, according to the data.

The yield on benchmark three-year Treasurys rebounded to 1.518 percent on Friday after tumbling to a record low of 1.093 percent on Aug. 19. Lower yields mean weaker demand for bonds.

Stock-focused funds, meanwhile, have posted an average return of 6.87 percent over the past one-month period, compared with a median return of minus 0.53 percent for bond funds.
(END)