The launch ceremony for the 2,800-ton FFG-II Seoul took place at Hyundai Heavy Industries Co.'s shipyard in the southeastern port city of Ulsan, according to the Navy.

Defense Minister Jeong Kyeong-doo attended the ceremony and celebrated the launch of the new frigate as well as the 74th anniversary of the foundation of the Navy.

"Uncertainties in regional maritime security situations have continued due to feuds over maritime jurisdiction and freedom of navigation ... Under these circumstances, we should secure more powerful naval capabilities," Jeong said in his congratulatory remarks.

"We will firmly protect national security and maritime sovereignty by perfectly carrying out all missions in seas surrounding the Korean Peninsula and the world," he added.

The Navy was founded on Nov. 11, 1945, as the first branch of military service in South Korea following the liberation from Japan's colonial rule. 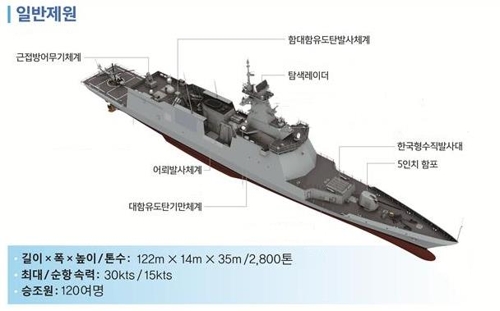