Under the plans, citizens living anywhere in the country will have easy access to emergency medical services and receive treatment for serious illnesses that require sustained care, according to the Ministry of Health and Welfare.

The plans also call for transforming midsized regional hospitals into top-tier medical institutions that can treat all types of illnesses, as well as for increasing the numbers of doctors and nurses at such facilities.

New public hospitals will be built in nine regions where there are no medium-sized medical centers.

The latest measures to reduce the gap in medical services comes as people living in regions outside of large metropolitan areas like Seoul are at a disadvantage in terms of the health care they receive.

Data showed that 93 percent of citizens in Seoul are able to receive treatment for major illnesses within the city, while this number plummets to 23 percent for those living in North Gyeongsang Province. Other findings showed that for every 100,000 deaths in 2017, 40.4 people living in Seoul died because they were not able to receive medical attention on time, with this number rising to 53.6 for North Chungcheong Province. 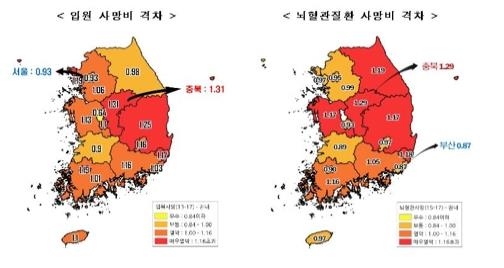