SEOUL, Nov. 12 (Yonhap) -- South Korean pharmaceutical firm Samsung Bioepis Co., Ltd. is expected to post the first profit in its history this year on the back of robust revenues from the European market, its chief said Tuesday.

"Three autoimmune biosimilar drugs sold on the European market have recorded 650 billion won (US$540 million) in sales between the first and third quarters," Samsung Bioepis CEO Christopher Hansung Ko told reporters in Seoul. "We expect to swing to the black for the first time in eight years since the foundation of the company."

Samsung Bioepis, established in 2012, currently has a total of four biosimilars approved and marketed across Europe - Benepali, Imraldi, Flixabi, and Ontruzant.

The chief also said the company is expected to post record-high sales and operating income this year. "We are expecting 1 trillion won in sales this year," Ko said.

Samsung Bioepis is a joint venture between Samsung BioLogics -- a biopharmaceutical unit of Samsung Group -- and its U.S. partner Biogen.

"Samsung Group has constantly invested into the firm despite knowing that we would post a deficit," Ko said.

Ko said the firm will further strive to win approvals for other biosimilars from the European and U.S. health authorities.

Samsung Bioepis' marketing authorization application for SB8 was accepted for review by the European Medicines Agency (EMA) in July.

The chief said it will also continue to cooperate with its European and U.S. partners who are responsible for marketing and sales in the respective markets.

Earlier this month, Samsung Bioepis entered into a new commercialization agreement worth $370 million with Biogen. 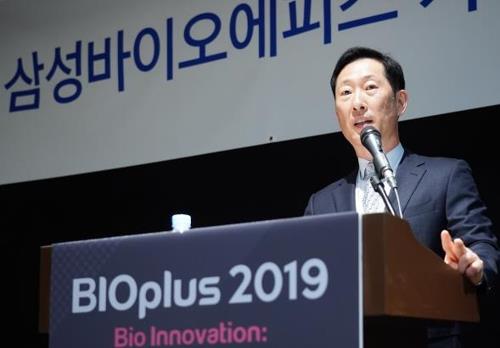