Milley, who was in Tokyo as part of a trip to the Indo-Pacific region, made the remarks following a meeting with Japanese Prime Minister Shinzo Abe, Japan's Kyodo News reported. Milley is scheduled to arrive in Seoul on Wednesday from Japan.

Milley said he and Abe discussed the issue of General Security of Military Information Agreement, or GSOMIA, "a little bit." The agreement is set to expire on Nov. 23, Kyodo reported.

"It'll be a point in discussion there (in South Korea). So we want to try to resolve that issue before it expires," Milley was quoted as saying.

In Seoul, Milley is scheduled to meet with South Korea's JCS Chairman Gen. Park Han-ki on Thursday for the 44th Military Committee Meeting (MCM), annual talks between the JCS chairmen of the two countries.

Asked if he is optimistic about finding a solution to the GSOMIA issue, Milley said, "We'll find out, we'll see."

The U.S. has since called on Seoul to reconsider the decision, but Seoul has maintained that any reconsideration would be possible only when Japan first changes its course.

The military information-sharing pact is seen as a key mechanism of trilateral cooperation between the U.S. and its two Asian allies in the face of security threats posed by North Korea and an assertive China that has deepened defense ties with Russia.

Embarking on his trip, Milley on Sunday echoed the standard U.S. view by saying, "It is clearly in China's interests and North Korea's interests to separate South Korea from Japan and the United States. It is in our interests to keep all three of us very closely aligned," according to the Pentagon. 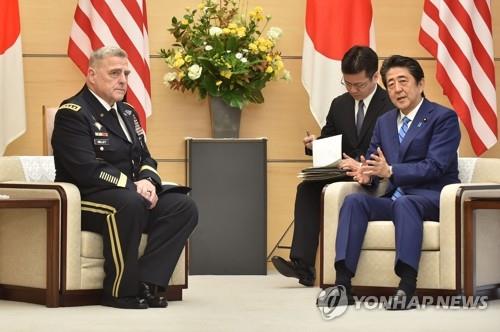