SEOUL/PYEONGTAEK, Nov. 13 (Joint Press Corps-Yonhap) -- The looming termination of the military information-sharing pact between South Korea and Japan, if realized, could send the wrong message that the U.S. and its two Asian allies are not strong enough to ensure security in the region, U.S. Forces Korea (USFK) Commander Gen. Robert Abrams said.

"The fundamental principle of the information-sharing agreement was a clear message to the region that the ROK and Japan put aside perhaps the historical differences and put at the forefront stability and security of the region," Abrams said in a press interview held on Tuesday to mark his first year in office. ROK is the acronym of South Korea's official name, the Republic of Korea.

"Together, we are much stronger for providing for stable and secure Northeast Asia. And without that, there is a risk of sending the wrong message that perhaps we are not as strong," he said during the interview held at his office at Camp Humphreys, a sprawling U.S. base in Pyeongtaek, 70 kilometers south of Seoul.

Abrams' remarks echoed the standard U.S. view that regards the three-year-old pact as a key platform for trilateral security cooperation in a region marked by an increasingly assertive China and a nuclear-armed North Korea.

U.S. officials have increasingly called for the pact's renewal. On Sunday, U.S. Joint Chiefs of Staff Chairman Gen. Mark Milley stressed that it is "clearly in China's interests and North Korea's interests to separate South Korea from Japan and the United States."

Seoul has maintained that any reconsideration would be possible only after Japan first reverses course. 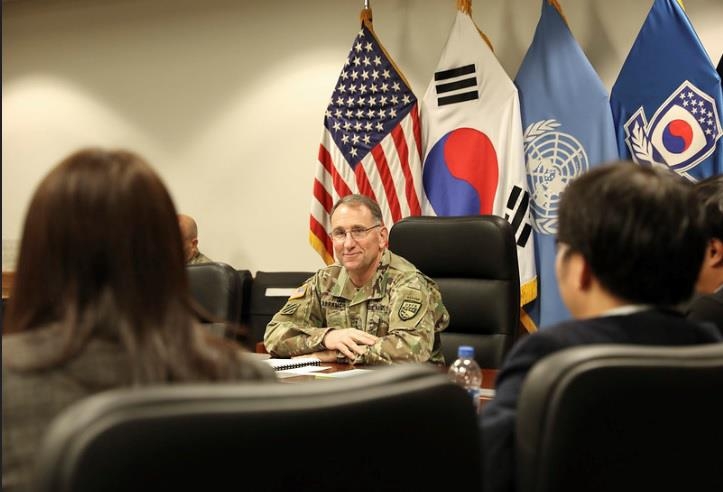 Speaking of negotiations to renew the defense cost-sharing deal between Seoul and Washington, or Special Measures Agreement (SMA), Abrams stressed that South Korea can and should pay more as the fund benefits the Korean economy and people.

The commander also noted that the money provided by Seoul is used to pay South Koreans employed by the U.S. military, extend logistical support and build new facilities for U.S. forces stationed on Korean soil.

"So I want to be clear, that money is going right back into the Korean economy and to the Korean people. It's not coming to me," he said.

The U.S. has been ramping up pressure on South Korea to sharply increase its share of the expenses for stationing about 28,500 American troops here, and it has reportedly demanding Seoul pay nearly US$5 billion annually.

Under the current deal set to expire at year's end, Seoul agreed to pay $870 million a year.

Asked about criticism within South Korea of the reported U.S. demand for a sharp increase in Seoul's payment, Abrams said, "A lot of the speculation in the information space is not well-informed," though he did not elaborate on details on the ongoing negotiations.

"I remain optimistic that we can find some common ground between our two governments," he said.

The two countries have so far held two rounds of defense cost-sharing talks and another round is expected to take place soon in Seoul.

Asked if the allies would be able to transfer the wartime operational control (OPCON) of South Korean forces from Washington to Seoul within the tenure President Moon Jae-in, the commander stressed the very premise of the "conditions-based" plan.

Many see the allies eying 2022, or thereabouts, as the target date.

"There's three conditions, we put it in writing in 2015, and now both sides have been working steadily to meet those conditions," Abrams said. "It's not based on time; it's based on conditions."

The right conditions required to be created before the OPCON transfer are South Korea's capabilities to lead the allies' combined defense mechanism, its capacity for initial responses to the North's nuclear and missile threats and a stable security environment on the peninsula and in the region.

"I think these missile tests we have seen in 2019 are not contributing to a continued air of détente on the Korean Peninsula. And I don't think they are helpful to foster an environment for the very important work of our diplomats to continue," Abrams said.

Noting that the military authorities of the allies closely analyze the launches, the commander said they take each case "very seriously" to determine North Korea's capabilities, limitations and intent.

Wrapping up the interview, he emphasized the staunch joint defense posture and the Korea-U.S. alliance, while dismissing speculation about their relationship that was raised following Seoul's decision to end the GSOMIA.

"We are, from a military alliance perspective, we are very, very tight. ... We had our ups and down historically, and on the back end of the downsides, we always come out stronger and more resilient, and tighter."