WASHINGTON, Nov. 12 (Yonhap) -- U.S. President Donald Trump urged his ambassador to the United Nations in 2017 to push stronger sanctions against North Korea, saying she should make the global body believe he is "crazy," according to her memoir published Tuesday.

Former U.S. Ambassador to the U.N. Nikki Haley wrote in her book, "With All Due Respect," that Trump gave her instructions to negotiate another set of U.N. Security Council sanctions against Pyongyang following the regime's nuclear test in September 2017. 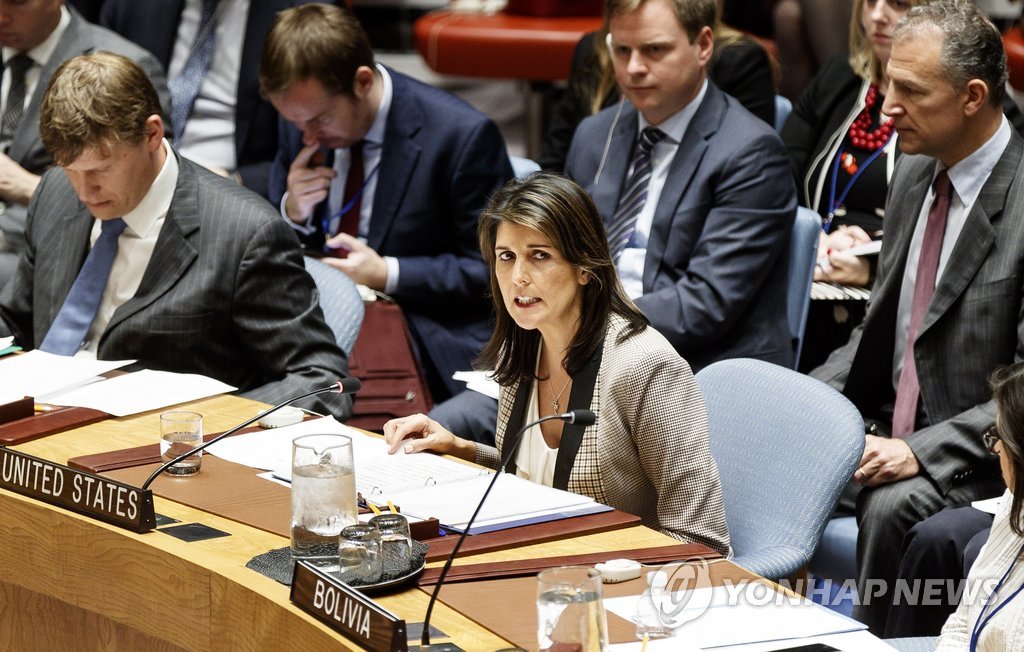 "Tell them you just talked to the president," Haley quoted Trump as telling her. "Tell them every option is on the table. Make them think I'm crazy."

Haley recalled that tensions were already high, with Trump threatening to rain "fire and fury" on the North. The U.S. used that to its advantage, she said, and the second set of sanctions also passed the council with unanimous support, including China's.

Trump was also open to dealing directly with the North Korean leader.

"As far as the risk of dealing with a madman is concerned," Haley recalled the president saying, "that's his problem, not mine."

Later in September, Trump's address to the U.N. General Assembly shocked the world. He not only mocked the North Korean leader by referring to him as a "Rocket Man," he also threatened to "totally destroy" the country if the U.S. was forced to defend itself or its allies.

Haley said the president consulted with her in advance.

Haley said she reminded him that the General Assembly would be "like church" and that it would not be something the diplomats were used to hearing.

The president protested, saying, "I tweeted it this morning and it's killing on Twitter."

And Trump went ahead with his plan.

Haley wrote in detail about the personal relationship she developed with the parents of Otto Warmbier, an American college student who died in 2017 after being returned from the North in a coma.

As a mother, she said, she hurt for the family.

When Trump appeared to absolve Kim from any responsibility for Warmbier's death, during a press conference after his second summit with the North Korean leader in Vietnam in February 2019, Haley said she jumped in to tweet out a message of solidarity for the Warmbier family.

"I don't believe (Trump) meant any ill will," she wrote. "Still, I knew how Fred and Cindy (Otto's parents) would take his remarks. I needed to respond before they did."

It will be a long process to end North Korea's nuclear threat, she added. "Until then, we miss Otto. We will never forget Otto."