SEOUL, Nov. 13 (Yonhap) -- The United States is expected to use a series of high-level defense meetings with South Korea in coming days to intensify pressure on Seoul to reconsider its decision to end a military information-sharing pact with Japan.

South Korea decided to end the three-year-old pact in response to Japan's export curbs on Seoul amid a row over wartime forced labor. The U.S., which considers the pact a key pillar of trilateral security cooperation with the two Asian allies, has called for its renewal.

Milley is scheduled to meet with South Korean Joint Chiefs of Staff Chairman Gen. Park Han-ki on Thursday for the 44th Military Committee Meeting (MCM), an annual discussion between the top military officers of the two allies, at which the GSOMIA issue could come up.

On Friday afternoon, Park and Milley will join their Japanese counterpart, Gen. Koji Yamazaki, via a conference call, for their annual Trilateral Chiefs of Defense (Tri-CHOD) meeting, during which the chairmen are expected to discuss security cooperation.

"The meetings between the JCS commanders have been held on a regular basis, and key agenda items include the security situation on the Korean Peninsula and the conditions-based transfer of wartime operational control (OPCON) as well as diverse pending issues," JCS spokesman Col. Kim Jun-rak said.

The intelligence-sharing pact is not among their official agenda items, but the issue would be on the table "naturally," according to officials.

On Tuesday, Milley told reporters in Japan, "It'll be a point in discussion there (in South Korea). So we want to try to resolve that issue before it expires."

GSOMIA, signed in 2016, is seen a key mechanism for trilateral security cooperation in Northeast Asia and beyond in the context of an increasingly assertive China and a nuclear-armed North Korea. 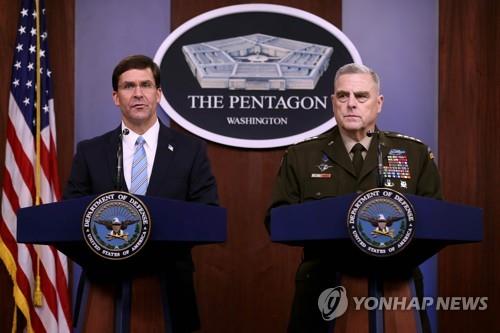 On Thursday, U.S. Secretary of Defense Mark Esper is scheduled to arrive in Seoul.

He will meet with South Korean Defense Minister Jeong Kyeong-doo early Friday and hold the 51st Security Consultative Meeting (SCM) to "have in-depth discussions on diverse pending security issues," according to the defense ministry here.

Announcing Esper's trip to South Korea, Pentagon spokesman Jonathan Hoffman said he can "practically guarantee" the topic will be part of his meeting with Jeong.

The Seoul ministry also hinted that the issue will be discussed during the meeting by saying that the two ministers will exchange opinions about "continuing security cooperation among South Korea, the U.S. and Japan" to better cope with North Korean threats.

In the face of stepped-up pressure by the U.S., some have speculated that South Korea may postpone the termination of the pact to secure more time for reconsideration.

But the government has dismissed this, stressing its earlier position that any reconsideration would be possible only if Japan first changes its course. 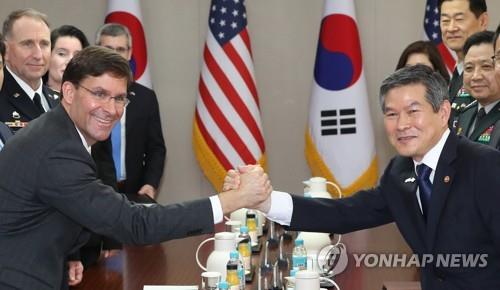 Following the SCM in Seoul, Jeong and Esper are reportedly scheduled to fly to Bangkok to attend the ASEAN Defense Ministers' Meeting Plus (ADMM-Plus) slated for Nov. 17-19, where their Japanese counterpart, Taro Kono, also will participate.

The conference could provide a chance for a last-minute breakthrough.

According to Japanese media, Seoul and Tokyo are arranging a bilateral defense meeting, and three-way talks between Jeong, Esper and Kono are also expected to take place on the sidelines of the multilateral event.

Then comes the meeting of foreign ministers from the Group of 20 advanced nations.

Seoul's Foreign Minister Kang Kyung-wha is known to be thinking about attending the two-day event that will kick off on Nov. 22 in the Japanese city of Nagoya. Her attendance could lead to her meeting with Japan's top diplomat, Toshimitsu Motegi, which could be a last-minute, bilateral showdown before the planned termination of the pact.

"In order for South Korea to reverse its decision, plausible reasons that its people can understand and accept are required. And such causes should be made through discussions among the three sides," Park Won-gon, professor of international politics at Handong Global University, said. 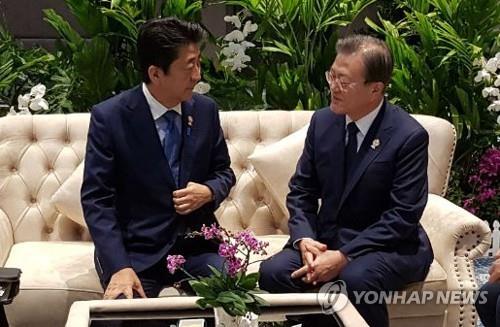 (LEAD) U.S. pressure expected to intensify on Seoul over GSOMIA this week

(LEAD) U.S. pressure expected to intensify on Seoul over GSOMIA this week

N.K. again rejects possibility of talks with U.S. as Biegun set to arrive in Seoul