SEOUL, Nov. 13 (Yonhap) -- The South Korean car-sharing app SoCar said Wednesday it has kicked off its "pairing service," which connects long-term renters and those who want to temporarily use preferred vehicles.

In the SoCar pairing service, a long-term renter of a SoCar premium vehicle can share the car with a so-called guest who wants to use it for 24 hours or longer, SoCar said in a statement.

The guest can book the pairing service via the SoCar app and make a payment for the service through the app. The long-term renter can get a discount on his overall rental costs depending on the guests' usage hours, it said.

Tesla's Model 3 has yet to be added to the lineup for the pairing service, a company spokesman said.

In August, Tesla launched the Model 3 in the Korean market as it strives to absorb a growing appetite for electric vehicles in Asia's fourth-biggest economy. 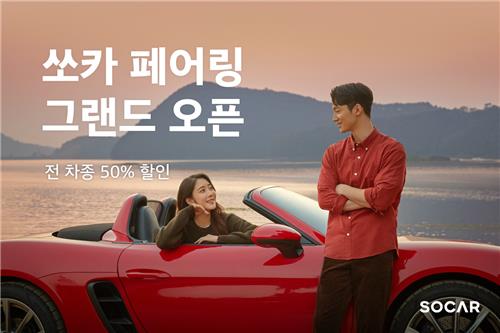