SEJONG, Nov. 13 (Yonhap) -- South Korea's economy is expected to grow 2.3 percent in 2020, slightly higher than this year's estimated 2 percent expansion, on the back of a slight improvement in domestic demand and exports, the state-run Korea Development Institute (KDI) said Wednesday.

The growth outlook for next year is line with a forecast by the Organization for Economic Cooperation and Development (OECD).

In September, the OECD said Asia's fourth-largest economy could expand 2.3 percent in 2020, slower than its previous forecast of 2.5 percent in May.

The International Monetary Fund has recently also revised down South Korea's economic growth estimate to 2.2 percent for 2020 from the 2.8 percent expansion projected in April, citing lingering uncertainties in global markets.

Private-sector spending is expected to improve next year, but the pace of recovery won't be strong due to the country's slowing income growth, KDI said in a report. 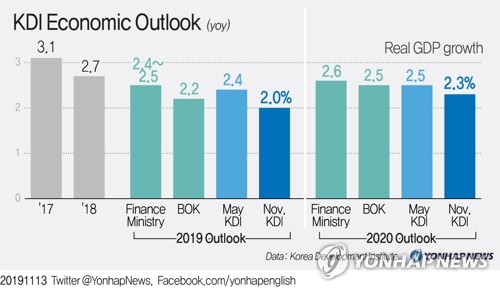 "It would be fair to say that South Korea's economic growth could rise to 2.3 percent in 2020 from 2 percent if the global economy rebounds to 3.4 percent from 3 percent," Kim Seong-tae, director of the office of macroeconomic analysis and forecasting at KDI, said.

He said the global economy could have upward growth momentum unless the trade dispute between the United States and China further worsens next year.

Earlier this week, Finance Minister Hong Nam-ki said that the government will make efforts to achieve economic growth of more than 2.3 percent next year.

The South Korean government is set to release its 2020 growth outlook in mid-December.

KDI slashed its growth outlook for this year to 2 percent from its previous forecast of 2.4 percent due to weak investments and a slowdown in the manufacturing sector as well as the trade dispute between the U.S. and China -- Seoul's two largest trading partners.

KDI said South Korea's exports are projected to decline 9.6 percent this year before going up 4 percent in 2020.

The think tank said a new flare-up of external downside risks such as the trade dispute between the U.S. and China could hurt South Korea's economic recovery. 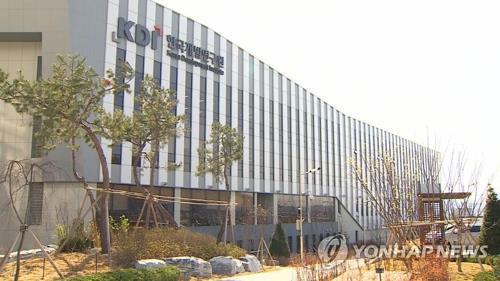 It also forecast that South Korea's economic growth could receive a big boost if global demand for semiconductors quickly picks up.

"Global demand for semiconductors is expected to increase next year in terms of volume," Kim said.

Semiconductors, which account for one-fifth of South Korea's exports, are in a cycle correction stage as the global economy slows.

South Korea -- home to Samsung Electronics Co., the world's largest memory chipmaker, and its smaller rival SK hynix Inc. -- accounted for more than 60 percent of the global memory market in 2018.

KDI also said the Bank of Korea needs to further maintain an accommodative monetary policy to cope with low inflation and economic headwinds.

Kim said the central bank has room to further cut rates at least one time in the next six months, noting that South Korea needs a mix of accommodative monetary policy and expansionary fiscal policy.

Last month, the Bank of Korea slashed its policy rate by a quarter percentage point to 1.25 percent -- the lowest level previously seen in June 2016.

In October, the U.S. Federal Reserve slashed its key rate by 25 basis points to a range of 1.5 percent to 1.75 percent.